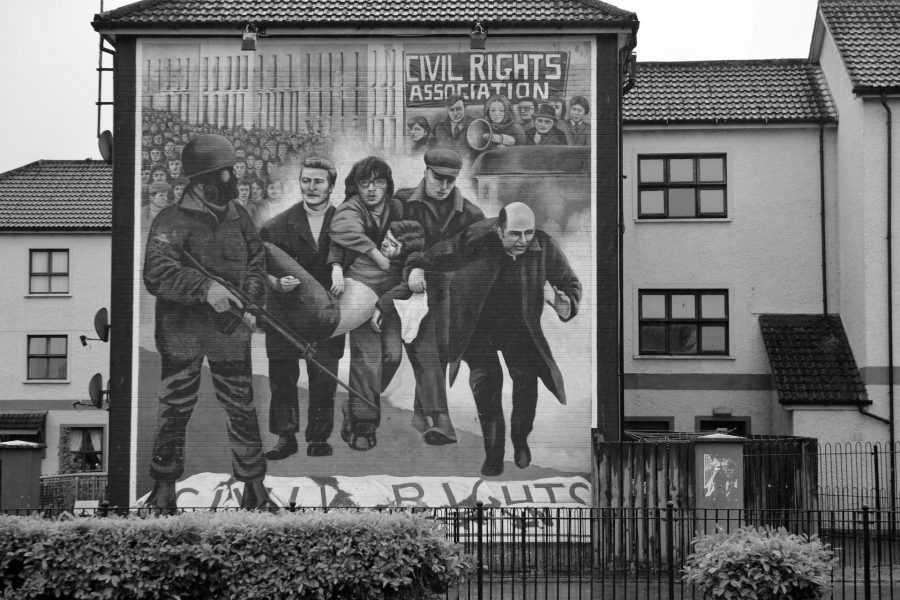 ‘In the early morning the shirt factory horn called women from Creggan, the Moor, and the Bog.’

The lyrics of Phil Coulter’s popular song, ‘The Town I Iove so well,’ evoke a time when Derry, under fire in the early days of Northern Ireland’s Troubles, could still provide jobs for the city’s working-class estates.

The factories are long gone, but the estates remain, entrenched in deprivation. Last week’s local government elections saw Gary Donnelly, a convicted criminal, dissident republican and former member of the ‘Real’ IRA, top the poll in the streets where journalist Lyra McKee bled her life away just two weeks previously. It is a depressing outcome in a contest that saw Northern Ireland’s centre-ground politics gain confidence and seats elsewhere.

The Moor electoral ward is something of a struggling outrider even in a liminal place like Derry. Economic and social deprivation here has stubbornly resisted years of peace processing and dependency on an otherwise (politically) resented state is generational. More than 40 per cent of its residents have no educational qualifications and 62 per cent are not in employment. The years since the signing of the Belfast agreement have been relatively kind to Northern Ireland’s capital city in terms of prosperity. By contrast, Derry, the second city on the fringe of the United Kingdom in every measure from per capita income to economic growth has either stagnated or gone backwards.

There’s plenty of evidence globally to show that there are strong links between economic stagnation and the sort of violent extremism that still glows with malignant strength in some of Northern Ireland’s forgotten communities. It is far easier to cultivate a grievance narrative in a place with very few legitimate ways for young people to advance out of poverty. A lack of formal power or agency is then easily overwritten by a combination of simple mythology and the insurgent glamour of excitement and status. A fragile state, rejected beyond its handouts and locally dysfunctional, cannot compete with the hate groomers.

These toxic factors continue to incubate a low level insurgency that while very local and mostly contained by the security forces is nevertheless sporadically lethal and also immune to treatment. Saoradh, the sullen mouthpiece of the New IRA is content to hold its position as the Millwall FC of Irish politics. No one likes them and they don’t care. The integrity of the armed struggle, no matter how rejected by society beyond the ghetto, is undimmed as long as what they see as Britain’s colonial presence persists in Ireland.

In this sense they are, for all the ‘community activist’ bluster implacably opposed to raising the condition of the people they represent. For just as there is a relationship between economic stagnation and violent extremism, they can’t have prosperity threaten their fiefdom or redirect a ready supply of credulous teenagers to the cause. To paraphrase James Joyce, the old sow of physical force republicanism still needs her farrow to eat for Ireland.