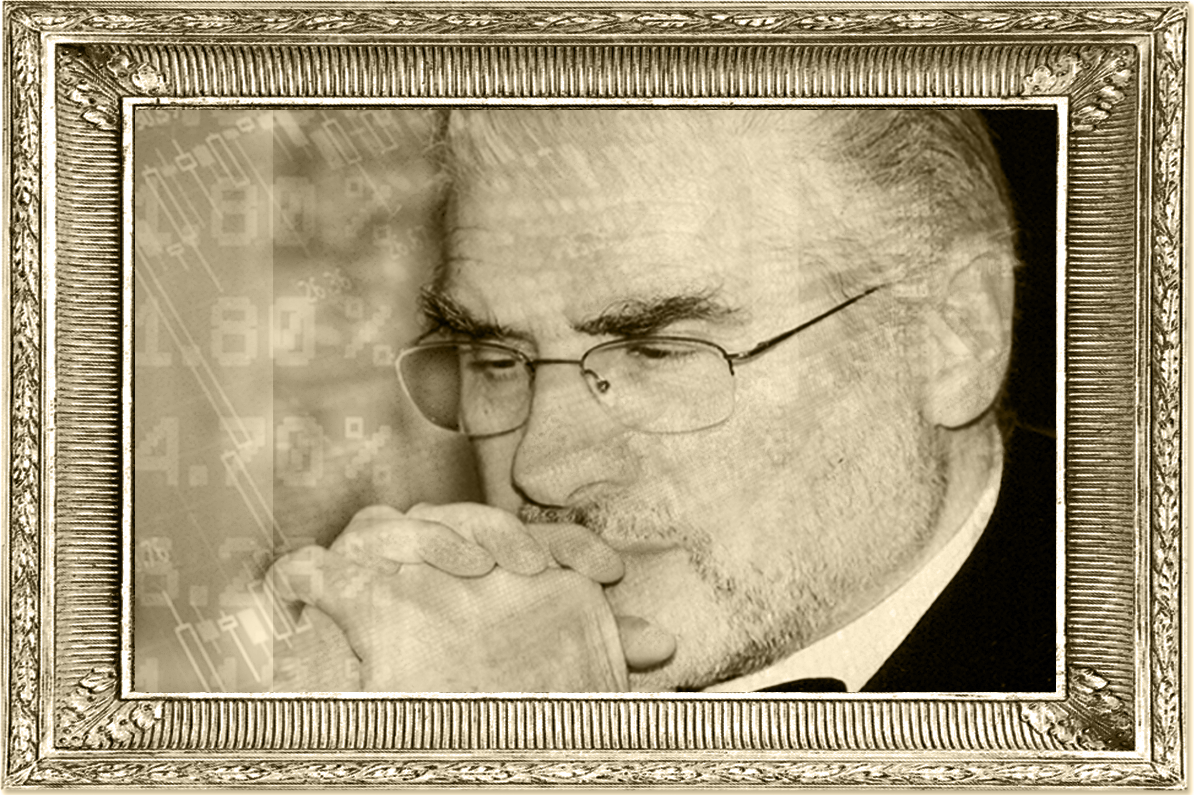 Thanks to a successful 40 year career as a property developer and investor, David Lewis has created significant assets, but is better known today for his extraordinary art collection than for his property dealmaking. He sold most of his remaining property assets in 2006 and 2007, thinking that the market was getting toppy, and has not been tempted back in since. In the second of our in-depth interview series he tells Jonathan Davis what he has learnt about the property business over the course of his long career.

David Lewis remembers well the first task he was ever asked to do as a young, still wet behind the ears property professional. Having earned his RICS exams exemption with a mixed degree from the College of Estate Management and the LSE, he was the first employee in a business set up by Barry East, who went on create and build Town & City, one of the most prominent of the postwar property companies. The young economics/estate management graduate’s task was to go down to the recently acquired Chiswick Empire site in west London – which East wanted to develop into ‘decentralised offices’, jargon of the day for ‘out of town’ developments – and clear a group of gypsies from the car park.

This task was not easy, because “then, as now, the police don’t want to get involved unless it has gone beyond a mere civil disturbance”. Although he says “I won’t go into the details of how we did it”, the job of evicting the gypsies was somehow managed and Lewis was on his way. He spent the next three years watching and learning everything he could as his mentor embarked on a frenetic round of dealmaking activity, driven by a fierce but ultimately flawed ambition to make Town & City as big as the giants of the development business, the likes of Harold Samuel, Jack Cotton, Charles Clore and the rest.

So that is how he became a dealmaker, I ask? “I was lucky because although I was only there for three years, I learnt more in those three years than I might have learnt in ten years somewhere else, because I was the first employee and it was a tiny office, and he was doing deals every day of the week – it was literally a deal a minute. I was thrown in at the deep end but when you are with someone like that, you learn fast.”

I was thrown in at the deep end.

Barry East’s core strategy was to find and then finance his deals through a series of sale and leasebacks, principally with the Prudential, then as now (along with Legal & General, the Coal Board pension fund and others) a leading institutional investor in property. The insurer would typically take a yield of 6% and the two partners would split any surplus return – 60% in favour of East’s venture and the balance to the Prudential. The details of every deal were dutifully logged and summarised for the board in a five-part report – a habit (and a business model) that Lewis was to maintain when he set up his own property venture five years later.

The other part of East’s strategy, once he had created Town & City, was to use his stock market listing to issue shares and build the balance sheet by acquiring freeholds. When he started out, there were still very few quoted property companies but once building controls were gradually lifted after the war, investors began to realise how much money the property men were making and it became a fashionable sector that they felt they had to invest in.

Town & City, like many others, began its life as a quoted company by acquiring a shell company, one of many rubber plantation companies that had fallen dormant. “They were turned into property companies overnight. Of course you didn’t worry about circulars and things like that,” says Lewis. “That was much too complicated. Barry’s policy, which I learnt fast, was that he would finance his developments principally by sale and leaseback and he would then also issue shares to buy other property companies.”

“Barry used to issue shares and acquiring freeholds was how the balance sheet was built up. The shares kept on rising because he was doing so many developments. In my time there it was all about the London railway stations. There were lots of leases from London Transport, such as Holborn Viaduct and Waterloo – 99 years and no rent review. It was just scheme after scheme. There was no capital gains tax in those days. Investors loved it. Property was the in thing. It was like IT companies now.”

“There’s always an industry which is the one to be in. It’s like the creation of the retail empires, which was done mainly between the wars. The chains like Burtons and Tesco – I knew Jack Cohen. I always remember him telling me: ‘I used to want to take shops, and the people would say, “We only want to lease to multiples”. I said, “If you don’t give me a shop, how can I become a multiple?”’ And he used to laugh.”

The 1950s and early 1960s were, in hindsight, a great boom time for property – relatively easy money, I suggest. “Yes, for property developers it was an easy money era, although you still have to understand that nothing is quite as simple as everybody makes out,” Lewis recalls. “If you had business flair, property development was the business to be in after the Second World War. Demand hugely exceeded supply, because after the war, not only office occupiers but also retailers were desperately short of accommodation. Town centre after town centre had been devastated. It was a time, to put it rather crudely, when as long as you had a telephone and a motor car and you could talk fast to your bank manager, it wasn’t that difficult to make money out of property development. The demand was such that you could more or less pre-let everything. The big agents had schedules of people who needed property and you pre-let.”

How interventionist policies made a difference

Things ceased to be quite such plain sailing after the election of the Labour government in 1964. The Macmillan government had introduced capital gains tax in 1962, and Wilson set up a Land Commission which was originally intended to revisit the 1947 Town and Country Planning Act’s proposals for a land tax and also introduced a notorious system of office development permits – proving in the process, Lewis observes, how little governments really understand about property (a theme that crops up more than once in our conversation).

What became the Land Commission Act of 1967 took three years to emerge and by then it had been “heavily emasculated. It was not the draconian removal of all development value that the Wilson government had planned. But obviously, during the period, it was a huge deterrent. What it did, of course, was restrict development to some extent. Then George Brown comes along with his Office Development Permits. Young people today will probably find it difficult to realise but for any office above 3000 square feet, you needed a permit from Whitehall.”

These two interventionist measures, like so many well-intentioned government initiatives, inevitably had unintended consequences. With supply now so limited, the most obvious was that “every building went up 20% in value overnight, because you couldn’t build anything. You also needed an IDC, an Industrial Development Certificate, to build factories. That is why all these factories were built up in the north and in Scotland, places that had poor communications and transport, and the wrong workforce. That was the only place you could get a certificate to build a factory. To get an Office Development Permit, normally it meant you needed to have a tenant. They wouldn’t give one for speculative development. If you had an occupier lined up, you had a chance to get it.”

By this stage, after three years with Barry East and two with another entrepreneurial company called Maybook Properties, Lewis had set up on his own. As well as his hands-on experience, he knew or was on good terms with other influential property figures of the day. These included Norman Bowie, who had moved from being Deputy Chief Surveyor at the Prudential to become a partner in Jones Lang Wootton, one of the most effective agents of that era, and he met other developers such as Maurice Wohl and Harry Hyams. (Lewis recalls in passing that the reason Hyams took so long to fill his office development at Centre Point was not because he was deliberately trying to grow its value by sitting on it, as many complained at the time, but because he had a rigid policy of only letting buildings to a single tenant. Centre Point was too narrow to appeal to large corporate tenants, and it was not until 1979 that Hyams finally relented and let a chunk of the building to the CBI.)

But the Wilson government did not deter you from going it alone, I say? “No, I set up my own office in 1964, just as Wilson came in [to government]. Everybody I knew said ‘don’t do it. The end of the world has come’. But I took the view that, as I didn’t have any money, nothing minus nothing is nothing, so it didn’t matter. I did have some minor money in the form of a few Town & City shares. But I was young, I was 25 years old, I had a wife and two children, but I had learnt my trade. I knew who to speak to at the Prudential and the Coal Board. And I knew Norman Bowie, who was retained as an adviser to all sorts of institutional funds.”

“There are loads of guys who have made a great deal of money in property in recent years. Alan Sugar is a very clever man; last time I saw, he was estimated at about £800 million. I don’t think he has any debt. If there is, it is minimal. You would not call him an original professional property man, but he’s a brilliant businessman. The Livingstone Brothers, at London and Regional, which is not public, are also brilliant. The two Israelis, the Zakays, have built up a huge company [the Topland Group].”