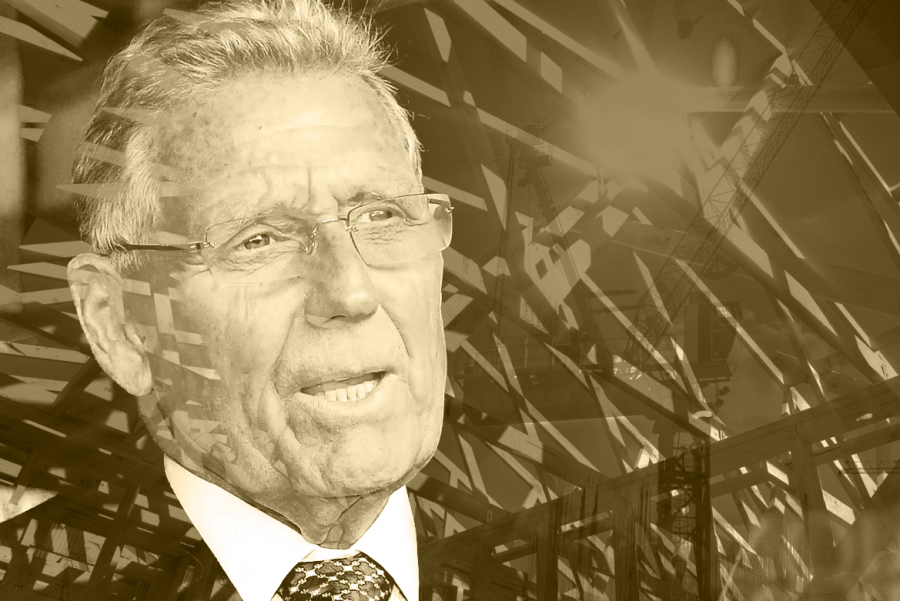 Veritable housing soothsayer Tony Pidgley turned 70 in August, and in September, Berkeley was re-admitted to the FTSE 100 for the second time – its share price hitting a new all-time high. Mr Pidgley’s 2017 fiscal pay packet was £26.9 million and in recent weeks he has sold two tranches of 750,000 Berkeley shares each time (which raised twice that amount). But “I’m not stopping any time soon,” he says, “there is still so much need, so much to do, so much to build” and “we have land everywhere”. Tony Pidgley talks to Tony Williams, and they have known each other for 33 years.

1976 was the year of the hot summer, Berkeley’s provenance and the emergence of Tony Pidgley. In the intervening 41 years all three have become soused in folklore, myth and legend. Apocryphal or not, what is real is the growth, nimbleness and ultimate pre-eminence of Berkeley in its chosen industry; and it is still led by Tony, who is Executive Chairman and a CBE.

The company was floated on the USM (Unlisted Securities Market) in 1984 and joined the main market in 1985 with a market capitalisation of some £67 million. Since then, the company has more than doubled in value in each of its 32 years as a fully listed company (i.e. +221% per annum). Put another way, Berkeley’s market value has squared (officially at £4.5 billion) and then some i.e. this month (October 2017) it bounced off £40 per share and a £5.4 billion market capitalisation. In September, Berkeley was also readmitted to the FTSE 100.

It is also true that Mr Pidgley appears to have a sixth sense which tells him when the property market is going up and when it is going down. This started almost before it all began, when in the year (and pretty much the month) that Berkeley joined the USM i.e. July 1984, the base rate (aka the minimum lending rate) rose 200 basis points in a single leap to 12%. This had only happened previously in the dog days that were the second half of the 1970s. The float went ahead anyway, albeit less money was asked for, because Tony could see through the mist realising that this was simply a blip not a trend.

Empirical proof came again, early doors, in the financial storm of the late 1980s/early 1990s when interest rates doubled in 12 months and mortgage rates did the same with many homeowners (and more mature readers) paying a rate north of 15%. And who went liquid in advance of this debacle?

Similarly, who remembers Trencherwood which also floated on the USM in 1984? It hit the buffers in 1992 when it was also forced into a penal debt for equity swap before being absorbed in 1996 by Wilson Bowden (now part of Barratt). This recession and its aftermath changed the face of the UK industry and led to the wide scale exit of contractors from housebuilding (save for Luddites such as Galliford Try and Kier).

Same again, too, in the global financial crisis (GFC) which started in 2008 and ran through 2012. Berkeley was the sole UK listed housebuilder not to write down its assets. In the three calendar years 2008 through 2010, companies comprising the publicly listed UK housebuilding sector wrote off £5.2 billion in provisions against asset carrying values i.e. this was 41% of the starting price of £12.8 billion in Net Asset Value (NAV). The sector also raised some £1.7 billion of fresh dosh from its shareholders during this period. Once again, who was buying land when Lehman’s went bust? And the group’s performance is still benefitting from this investment – almost 10 years on.

As the late, great Carwyn James once said: some players sniff the wind, others create it. Mr James was coach of British and Irish Lions on their tour of New Zealand in 1971 and this is still the only Lions side ever to win a series against the All Blacks. He said: “I love an inner calm, a coolness, a detachment; a brilliance and insouciance which is devastating”.

I was a cub building analyst in 1984 at Grieveson Grant which was absorbed by Kleinwort Benson a year later which, in turn, was bought by Dresdner Bank in 1995 which then disappeared into Commerzbank in 2008…

In any event, Grieveson Grant, or ‘GG’ as it was affectionately known, was still a partnership (pre-1986s Big Bang) and one of the partners summoned me to his desk one day to ask about the privately-owned Berkeley Group. “Williams, I have just bought a super new house down in Surrey from this outfit called Berkeley. I think the company might be worth a look. I think they might float. You should go and see them.”

And so, as ‘recommended’, I took the train to Weybridge and met Tony Pidgley and then-CFO Paul Read, and I was collected from the station by Paul in Tony’s Rolls Royce (the boy had style from the get-go). They were both very nice people and self-deprecating to the extent that they said “we have a lot to learn”. But even then, no one was building houses like Berkeley.

As is lodged in folklore, too, the company was named after Berkeley Square in the West End. “Why not?” they said at the time. And: “Who knows, too, we might have an office there one day.” Okay, the latter is one of the few things that didn’t come true.

Berkeley is not simply a common or garden housebuilder, it is a creator of communities on both a diminutive and massive scale – and often in initially unprepossessing locations. It is probably the best at it in the UK (its sole marketplace). “Above all else, enhancing property value is about having time. This is afforded to Berkeley by its strategy of taking low financial risk through a combination of matching production to demand, selling forward and only gearing when there is sufficient visibility of future cash flow.”