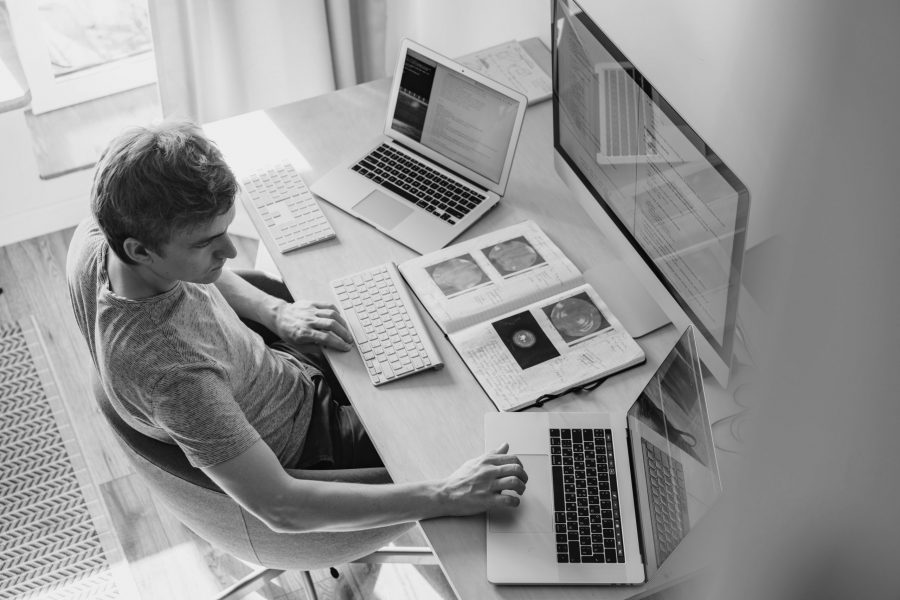 Around 15 million people work in around 410 million m² of office space in Germany. Although many people used to work occasionally from home prior to 2020, the home office only became the available option for many workers in the course of the coronavirus pandemic. People’s experience during this lockdown period has certainly been mixed; daily commutes have been shortened, coordination work has had to be conducted electronically in a new system, work-life balance has been renegotiated hour by hour, and not just based on landmark decisions concerning family and career planning.

Above all, however, many companies and their managers have had to set aside their fears of addressing the issue of working from home and have had to embark on a learning curve that was previously often avoided, be due to caution or prejudice; what’s more, employees have not had to put their head on the line to voice their wish to work from home. Experience is like the mythical genie in the bottle; once released, you cannot undo the experience. The genie stays outside the bottle for good. This is where the analogy between experience and the genie in the bottle ends because it is primarily up to us to make what we can of our new experience, i.e. how we continue up the learning curve. So, the first message of this essay is that everything we have learned about working from home over the past few months represents just the first steps on a longer journey.

What could the next steps look like? In a recent study, analysts conducted by Catella (2020) found that two in every three respondents prefer one to three flexible days, and 20% of those surveyed even prefer complete freedom in terms of how they structure their working hours and place of work. This additional flexibility could enable companies to economise on fixed office space and this, in turn, could significantly reduce the demand for office space. If, for example, every employee were actually to work from home for two days, and if only half of this space thus temporarily freed up were then to be planned more flexibly in existing office premises, e.g. in the form of shared office workplaces or by leasing more co-working space, this could reduce demand for office space by one-fifth in the long term – 80 million m² rental space or seven times the office supply in Frankfurt (all other things being equal).

However, the point of this paper is not to estimate how much the demand for office space might (or might not) dwindle in the next few years, but rather to argue that there should be a wide range of different answers to the question of an appropriate home office ratio in a company and that government intervention can do more harm than good here. At the end of the day, it all depends on individual learning steps and the specific needs of teams and companies.

Ultimately, office real estate is an elementary production factor for a company. The actual decision for or against specific permanent premises should be based on whether additional profit expected from this decision is higher or lower than any other alternative. This may sound trivial, but unfortunately this statement masks a whole series of management decisions that are currently being given relatively little air time. Is this profit just an additional short-term, e.g. profit achieved within a year, or is a discounted figure maximised from many additional sources of profit? Does the effect result from sales growth or cost reductions or a mixture of both, and could these effects possibly also be realised by other measures? This question is important because cost reductions can often be estimated more reliably than changes in revenue. Does the result depend on political constraints or possibly on the absence of those constraints?

More specifically: a company’s costs could of course fall if it had to rent less office space and have its employees make their home available to the company, i.e. turning their home into an operating resource. Applying the same logic, the company would also save money if we brought our own personal computers or printers to work. However, this would only be the case if lawmakers tolerated this outsourcing arrangement on a permanent basis. According to the German Workplace Ordinance (Arbeitsstättenverordnung) which governs teleworking jobs regulated under contract, teleworking jobs currently have to comply with stricter safety and workplace requirements than remote workplaces. This would invite persistent regulatory arbitrage and is likely to lead to regulatory changes in the medium term. In this case, rules on occupational safety or the tax treatment of these resources could be tightened. Understandably, more has been tolerated during the pandemic than could be expected in the long term. Times of crisis are not times for bean counters.

Costs are only likely to fall if they are not countered by additional transaction costs in the form of further agreements, increased controls or higher expenditure resulting from correcting errors. It is likely that this period of great uncertainty we are experiencing during the lockdown will not adequately substitute the behaviour of employees and managers when things hopefully return to normal in the years ahead. Employees could better exploit greater latitude in periods of relaxed working practices than during periods of great job insecurity, while managers could feel more uncomfortable with the possibly perceived loss of power and control than during the exceptional phase. The success of working from home then not only depends on technical parameters such as space and IT availability, but probably even more so on what kind of mindsets and specific activities are present and need to be performed in a team.

These soft factors are likely to be particularly important where office workers not only carry out firmly defined packages of work, but where the quality of the outcomes simply cannot be fully determined in advance, where incidental events in the teamwork produce an unexpected outcome, and where the interaction of people allows creative solutions to be found or leads to a new problem being identified.