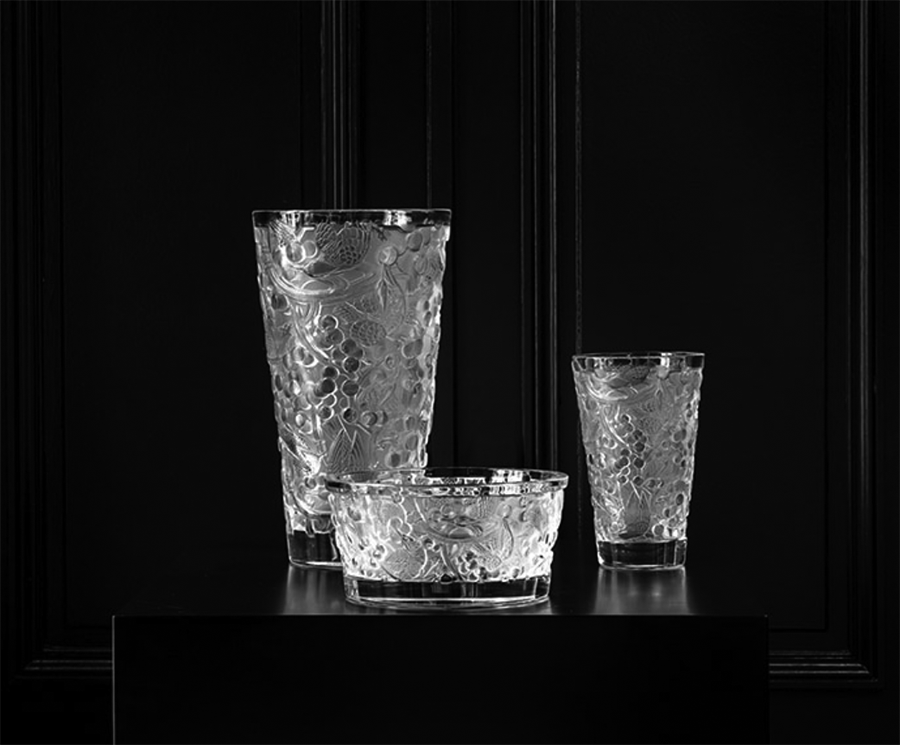 How a childhood memory sparked half a century of collecting Lalique glassware.

Collections start in all sorts of ways and, in this article, a long-standing Aston Lark client tells Private Clients Director Julie Webb how his 300-piece Lalique collection evolved.

My grandmother’s glass vase of bright yellow daffodils was always a lovely childhood memory, so when she sadly went to live in a nursing home, I was asked to choose an item from her home as a keepsake. The vase was my wish.

I had not particularly known much about Lalique or appreciated its worth. Yellow is my favourite colour, so the vivid picture of the flowers in a vase was something special to me. The vase, called Ceylan, was probably a wedding present to my grandparents as they married in the 1920s. It is very much of its time, with a beautiful depth of colour and soft blue shading on the birds’ feathers. I am still particularly drawn to the crystal opalescent glass which gives a milky white effect.

A couple of years later, in the early 1980s, I bought a heavy Lalique bowl, Tournon, at an exhibition in Alexandra Palace, in London. We used it as a fruit bowl and our children could just about reach it on the kitchen worktop, grabbing an apple by letting the bowl lean towards them and allowing it to roll back. When we had our house contents revalued for insurance, and we discovered the bowl’s worth, we decided to put it on a display shelf and the fruit went into something more ordinary!

However, we do use our Lalique wine glasses and plates without panicking because we have accidental cover. My wife and I think, “What’s the point of having them if you can’t enjoy them?” The wine glasses tend to come out at New Year and special occasions.

We gradually began to discover more about the Frenchman René-Jules Lalique, who was probably the world’s premier glassmaker during the 1920s and 30s. He came to prominence at the International Exposition of Modern Industrial and Decorative Arts in Paris in 1925, creating the evocative Art Deco style we both admire.

We bought a piece of Lalique when each of our children were born and over the years we have purchased and sold items, both antique and modern. We have two decorative car bonnet mascots that were made between 1925 to 1931. In those days they would have had a base and wiring, so the mascot lit up when the car started moving.