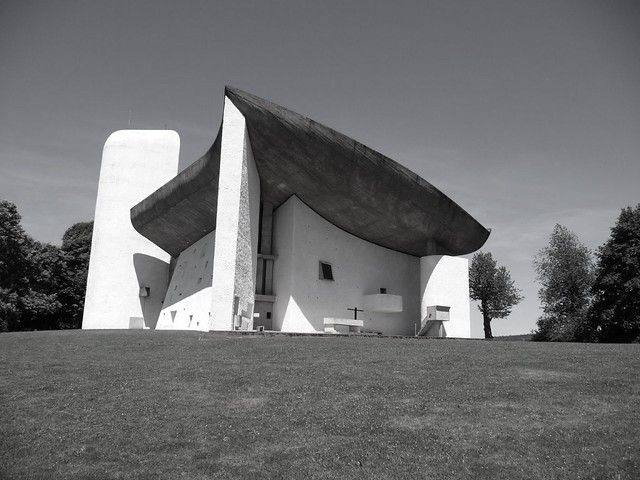 Unusual, yet awe-inspiring, the Ronchamp chapel has to been seen to be believed

I must confess that I am slightly privileged by the fact that, working constantly with architects, I am occasionally offered trips to see buildings of interest, whether here in the UK or abroad. One such occasion was when our company worked with Make Architects in London, who decided to celebrate a planning permission they received in Fitzrovia with a grand trip. The proposal was to visit the city of Basle and Vitra furniture headquarters in Switzerland, make our way to the Vitra Design Museum in Germany, and then finally onto Corbusier’s Notre Dame du Haut, a chapel in Ronchamp, France. What a fantastic opportunity! My colleagues at Derwent and I wasted no time in accepting, and I knew I was in for a rather special architectural treat.

The story of the Ronchamp chapel started in 1950, when Corbusier was commissioned to design a new Catholic church to replace one that had been destroyed during the second world war.

The Church wanted a pure space, void of extravagant detail or ornate religious figures, and therefore unlike its predecessors; Corbusier wanted the space to be both meditative and reflective in purpose.

When our group first approached the building, it evoked a sense of incredulity amongst us. Despite having seen many pictures of the chapel, we were not prepared for the feeling provoked upon seeing the building first-hand for the very first time. I suppose it was the power of sublime architecture that was at hand.

Firstly, the building is comprised of such an unusual, organic shape, but it is the roof that instantly grabbed my attention. It seemed to defy the logic of geometrics, and yet it was so graceful and serene – like an oversized cloud attaching itself onto the main structure.