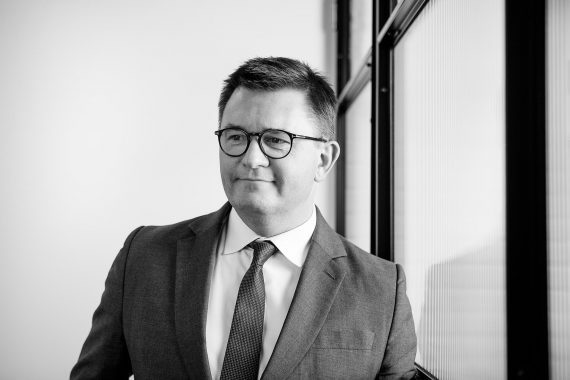 This article was originallly published in July 2019.

Justin Bickle, formerly a managing director in Oaktree’s European Principal Group, tells Property Chronicle how turning around English National Ballet gave him the confidence to set up one of Ireland’s biggest housebuilders.

Justin Bickle is a risk taker who seizes opportunities. You might think this unremarkable for a restructuring lawyer turned distressed debt investor at Oaktree, one of the world’s leading credit fund managers. However, his story is not the conventional one of a hard-nosed investor. He also has a softer side.

Having turned around a leading arts organisation in his spare time, as chairman of English National Ballet, which was quite a surprise for a West Country sports fan, he moved to Dublin in August 2017 to head up one of the biggest property start-ups in Europe, Glenveagh Homes.

Within three months the company became the second Irish housebuilder, after Cairn Homes, to float on the Dublin Stock Exchange, raising €350m to develop land built up by Bickle’s former employer into residential units for private and public owners as well as institutions looking to get into the sector.

Bickle is at pains to say that he was not just lofted in by Oaktree, where he had been Managing Director in Oaktree’s European Principal Group for 12 years. Glenveagh was the outcome of a lengthy eight-year process from both Oaktree and himself looking at European real estate from all angles.

Bickle first started looking at Irish opportunities in March 2010, months before the country was forced to seek help from its eurozone counterparts and the International Monetary Fund after it faced a debt repayment crisis following a disastrous bail out of its banks.

“I got a call from Goldman Sachs looking for a white knight for McInerney Homes. I flew in to take a look. Both property and banking were completely frozen and Nama [National Asset Management Agency] had just been established,” says Bickle.

Ultimately Oaktree did not proceed with the McInerney workout but the seeds of Bickle’s interest in the Irish real estate opportunity were sown.

“I didn’t have a network on the ground and no clear path to invest. In hindsight it was a bit early but I had a thesis that residential would recover and over time it would become institutional quality,” he says.

Before then, most housebuilding in Ireland had been carried out by individual entrepreneurs backed by banks, unlike in the US and UK where funds were willing to back public companies.

Bickle and Oaktree instead proceeded to build a network in Ireland at the same time as buying land that could be developed from the banks and other sources.

Oaktree’s strategy was to build platforms, setting up start-ups in real estate subsets such as student accommodation, later living and serviced apartments in various countries around Europe. Some developments were also undertaken in Ireland.

“We were one of the few to take risks and were among the first to put up cranes doing commercial office developments,” says Bickle. Throughout he was confident the economy would eventually recover.

“The crisis was extremely difficult for people living through it but they were resilient and there were no riots on the street. The economy bounced back much more quickly than people anticipated.”