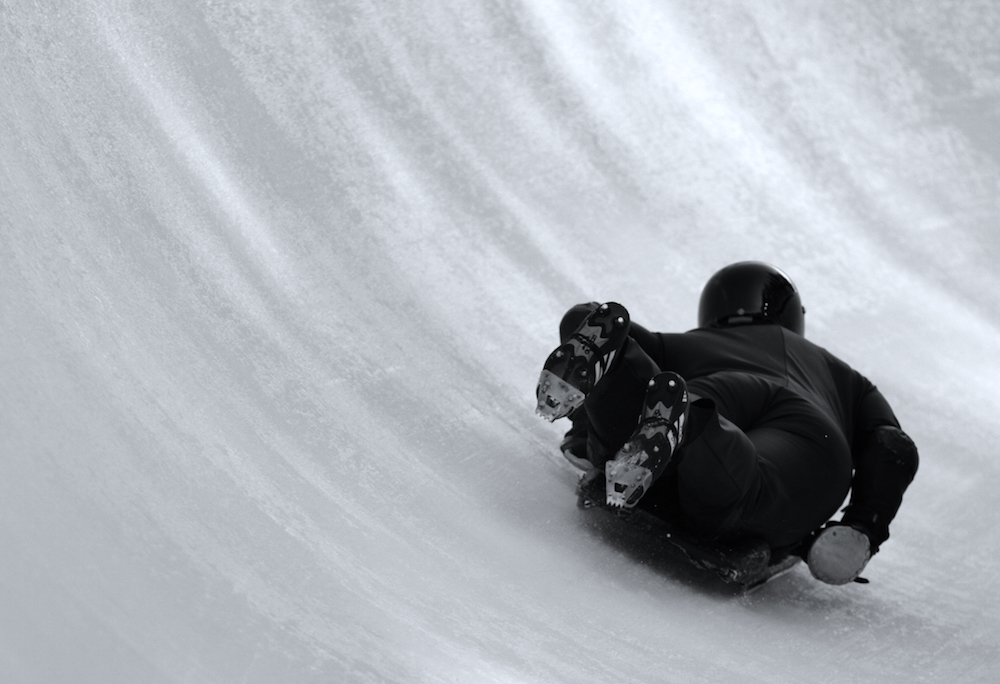 After a break of a year, it is always a shocking experience to stand at the top of the Cresta run again, preparing to hurl myself head first down an ice chute at over seventy miles an hour. Existential questions that my mind asks like ‘why are you doing this?’ receive answers like ‘because it is fun’ but just don’t seem convincing at all. Ensuring that one does not come a cropper on the infamous corners of Thoma, Shuttlecock or even the dangerous finish banks certainly focuses the mind.

I am not convinced that riding the Cresta is an architectural experience but it is definitely a sensory one. At minus 15 degrees Celsius the ice glimmers enticingly in the morning sun but don’t be fooled, it is as hard as concrete. The blades on the metal runners, polished to perfection the night before, will slice through a misplaced finger like a knife through butter but they are the only things that will safely guide you down this beautiful run to the finish. The feeling of exhilaration, relief and sheer joy is overwhelming when I come to a halt on the matt at the finish in the charming village of Celerina, some three quarters of a mile away from the top.  The sun shines and the faint waft of cattle from a nearby farmhouse add to that warm feeling and general love of life that is generated, I presume, by the huge amount of natural endorphins that have just been injected into my brain.

St. Moritz is a curious place. The first maps dating back to the early sixteenth century do not acknowledge its existence. Zuoz, Samedan, Pontresina all get a mention but St. Moritz, a tiny hamlet is of no importance. When the hotelier, Johannes Badrutt, in 1885 challenged his, mostly English, summer guests to come up in the winter for guaranteed sunshine and some fun on the snow and ice St. Moritz took off. The first guests were invalids seeking recuperation in the pure mountain air. A few good lunches at the Kulm Hotel and the mad idea of riding down the bends of a frozen river bank to Celerina on a tea tray seemed very appealing, became an organised sport and the Cresta Run was born in 1887. This is why architecturally St. Moritz is so strange a town. The few genuinely old buildings are deluged by the massive sprawling hotels which come in one form or another of what might be described as ‘Sanatorium Gothic’. Add in a large amount of injudicious post war development and you get a sort of winter Las Vegas by the frozen lake where anything goes architecturally.

However, the indigenous architecture of the Engadine, which can be found in the many surrounding villages and valleys, is unique.  In this day and age, it is easy to assume that Switzerland was always a country of rich, secretive bankers with a prohibitive exchange rate. In fact the opposite was so. Switzerland had no natural resources and was unproductive agriculturally. Its major export was mercenaries to the larger warring nations surrounding it.

For those not off fighting foreign wars, farming was vital for survival in these cold, inhospitable climes. The summer is only three months long and everything has to be harvested and stored during this small clement interval. Farming and the land was so important in the Engadine that the traditional house was based on a single prototype. Whether you were a small poor farmer or a rich aristocrat with a large amount of land, your house would be the same design. The only difference was size.

Because the climate in the Engadine is so harsh the timber chalet, which has become synonymous with the image of Switzerland, is too fragile to survive. This form of wooden building is associated with the lower altitudes of Switzerland, such as the Bernese Oberland. In the Engadine, the traditional houses are built of stone as timber just does not last in such a hostile environment.  Similarly, because of the climate and the incredibly short season for growing and harvesting, the varied activities of farming all come under one roof and into one building. Going outside was, and is, often a perilous task and best avoided if possible. So, it may seem strange to live above the animals and the dung heap but that is what they did and some still do. The typical Engadine house is usually rectangular in plan but divided into two. On one side is the double height hay loft for storing the harvested grass throughout the winter and on the other is the living quarters. (Now that the Engadine is a mecca for the international art world, many of these impressive spaces have been converted into art galleries.) Externally the hay loft is visible by two tall double height arches infilled with leaky vertical timber boards for ventilation.  The livestock occupy the whole of the lowest basement level, the stalls generally being under the hay loft.  From the outside, the basement is accessed through a separate arch, usually on the gable end of the building but can also be reached internally by a stairs.  This arrangement has a number of advantages. First the animals can be accessed directly from inside the house without having to go outside and secondly the warmth generated by the animals helps to heat the rooms above.

The ground floor contains the ‘saler’ which is a large entrance hall and storage room for the farm machinery of carts and sledges.  This is also accessed from outside through an arch. The saler leads directly into the hay loft via a bridge or ‘talvo’ and to the side, off the saler, is the ‘stuva’ or living room which is the most important room in the house and is the only room that is heated by a stove. This is the most elegant room in the house also, sometimes richly decorated with carvings in the wooden panelling, and is used for family gatherings and entertaining guests. The ‘chudafo’ next door has an open hearth for cooking and for the smoking of meat.  This is generally a dark and dingy room as the walls are covered with pine pitch.  A hatch allows the food to be passed through to the stuva. Next to the chudafo is the ‘chamineda’ which is used as a store for seeds or other valuables. Above the stuva is the ‘chambra’ where the family sleeps. This is a simple undecorated room which is accessed by a ladder from below.  Being situated above the stuva it benefits from the heat of the stove. As this is a room for sleeping, it typically has only a small window or even just a hole for ventilation.  The rest of the first floor is accessed separately from the suler by a stairs. This large room called the ‘plantschin’ is for the farm hands to sleep in and again has access to the hay loft.

This pattern repeats itself throughout the Engadine and many examples can be seen in Zuoz, La Punt, Silvplana, Madulain and Pontresina. Externally the stone buildings are rendered and in the later cases a unique form of decoration called ‘sgraffito’ is used to embellish the facades and openings. (This was and is carried out by Italian artists who travel from across the border a few miles away.) As the positioning of the fenestration is designed from the inside to the outside, a charming sense of irregularity and asymmetry characterises the often impressively large facades of many of the buildings.

Clusters of these farm buildings form the ancient and charming villages. The buildings are oriented away from the harsh, hostile mountains and towards the village fountains. Each fountain is shared by a number of families and so the fountain is a place of social interaction. A highly decorated oriel window is often strategically placed on the facades of the buildings to ensure that a view to the fountain is always possible from inside the building without going outside.

Appreciation of the Engadine vernacular was slow as these old buildings were perceived, in the nineteenth century, to be primitive.  The regular rationally designed facades of the new hotels rejected the roots of Engadine building for the new and what was considered sophisticated and cosmopolitan at the time. However, with the help of some enlightened architects and patrician families, some of whom had gone elsewhere to make their fortunes and then returned to the valley of their birth, an appreciation of the traditional building forms gradually increased. In the rest of Europe, there was also an increasing awareness and appreciation of traditional building patterns as expressed so well by Camillo Sitte in his 1889 book titled ‘City planning according to artistic principals’. In the Engadine, the architect Nicholas Hartman, amongst others, contributed to the appreciation of the unique Engadine way of building. In fact Zuoz, further down the valley from St. Moritz, became one of the first self-consciously historical towns in Switzerland, with its civic leadership ensuring that its unique older buildings were preserved.