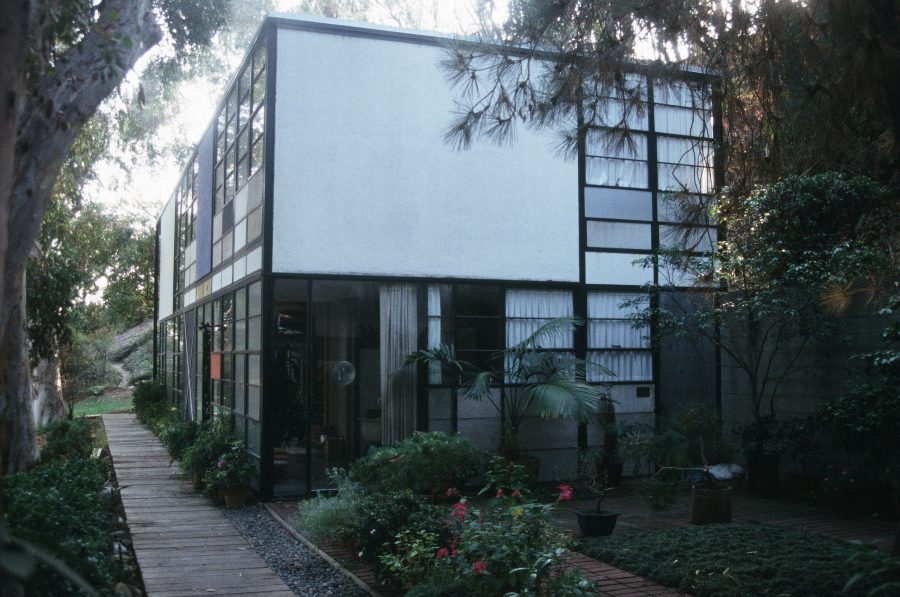 There is often a great desire for the keen student of architecture to see buildings in the flesh rather than as idealized photographic images which are so accessible in books and, especially now, on the internet.  So how do you see the buildings you admire when they are private, rather than public?  For most true believers, this is not an insurmountable obstacle.  It is an inconvenience which can be navigated around if one approaches the problem with a certain amount of courage.

When I was lucky enough to be granted a sabbatical from work some years ago, I found myself, with my wife, in California and with an overwhelming hunger to see some of the post war ‘Case Study’ Houses, first hand.  The ‘Case Study’ houses were a series of experiments in residential architecture, from 1945 until 1966, and were sponsored by the architectural magazine, ‘Art & Architecture’.  They were often experimental prototypes that were designed to address the large housing needs of California after the Second World War.  However, there was a problem in that most of these houses were privately owned and were inaccessible.  Some were in gated communities guarded by armies of security guards; others were down private drives patrolled by packs of hungry Alsatian dogs; while others were now in neighbourhoods into which it was too dangerous to venture.

Thus we found ourselves in a rented car in front of a large electronic gate through which I had no way of passing.  I was too shy to acknowledge my true intent to my wife, a qualified barrister and who I knew would be disapproving of any illegal manoeuvres.  Having been rejected by the anonymous voice of a security guard at the end of the intercom button beside the gate, I was fortunate that it was not too long before a delivery van to this particular community wished access too. The gates buzzed open and yours truly glided into the slipstream of this legitimate vehicle passing up the hill and through the gates.

In this instance, despite my wife’s horror at the deceit, the owner of the house, when I finally located it, was incredibly generous and welcoming.  I understood why she was a little startled when I rang her door bell (although not quite startled enough for me to sense that this had never happened before) and asked in the most polite English I could muster, if I might be able to see inside her wonderful home that I had long studied and appreciated from books.  She was ‘delighted to show us around’ as it turned out.

Not all owners are so generous.  A friend of mine once went to visit Frank Gehry’s house in Santa Monica and after a number of initial perimeter circles of the house plucked up the courage to ring the doorbell to see if he might peruse the interior too.  Amazingly, the eminent architect himself answered the intercom.  Unfortunately for my friend, Gehry was not accommodating at all and in a weary, I have done this many times before voice, told him in no uncertain terms that the great man had just finished his Sunday lunch and would rather be left alone in peace.

My late father, also an architect, had warned me of this predicament.  In fact, he had gone so far as to say that there was often a pattern to clients and the different responses from owners of houses designed by different architects.  For example, he said that Louis Kahn clients were generally very amenable while Philip Johnson clients were less accommodating.  He even implied that the generousness or otherwise of a client sometimes impacted on ones’ judgement of the actual architecture itself.

It turns out that the owners of Pierre Koenig houses generally are good eggs and in this case this lovely widow was very understanding and led me and my wife, a random British couple that she had met literally seconds before, on a full tour of her wonderful Case study house, number 22.  In this instance the risks of attempting to procure such an invitation were definitely worth it.  The building, from the outside is low, horizontal and flat and indeed rather modest. However, it is set on a steep hill and has the most extraordinary views imaginable which can only be appreciated from the inside.  The whole of Los Angeles is beneath one’s feet, sparkling away like some sort of vast magically lit miniature train set.  And, of course, these views can only be really appreciated if one has the courage to gains access to the inside.