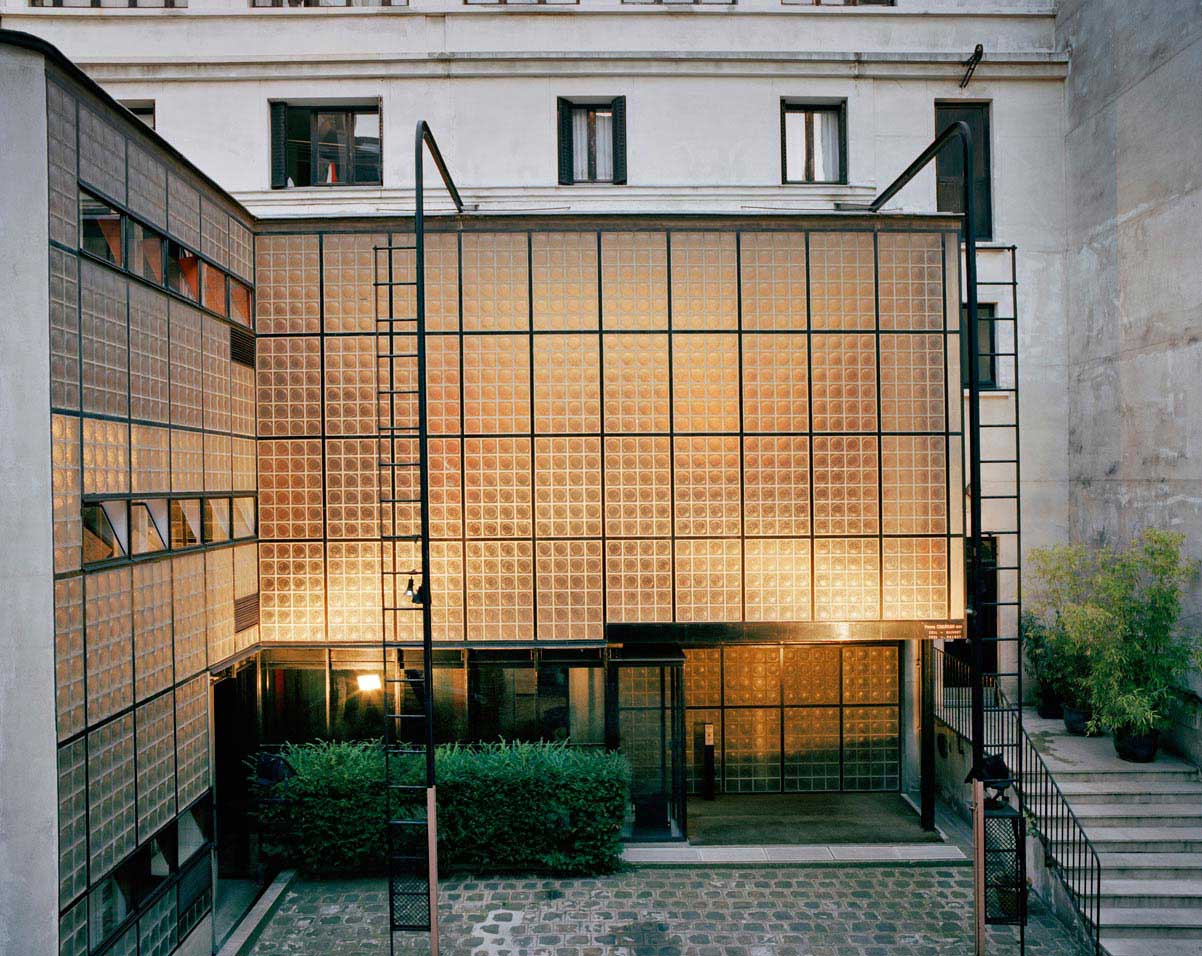 Pierre Chareau is not a name that springs to mind when contemplating the great architects or designers from a previous era. Whilst Chareau is best remembered for his furniture designs, this singular French architect did help construct, in my mind, one of the great contemporary houses to be built in an urban location. ‘Maison de Verre’ is a distinctive and totally unique residence. As its name suggests the house is primarily made of glass. On my visit, the first feature that struck me was the glow that radiated from the stunning Nevada glass block façade that hides everything that happens inside.  The building is set in an 18th Century Parisian paved courtyard.  Bathed in sunlight during the day, whilst illuminated by floodlight at night, it glows like a beacon, proudly announcing its modernistic and exclusive presence.

On entering, one is immediately overawed by the sheer volume of the spaces within which are more on an industrial scale than residential.  But then, so too are all the fixtures, Chareau was perhaps one of the earliest pioneers (together with Jean Prouve) of what we refer to today as ‘industrial design’. Features like rotating metal screens, sliding doors, rolling ladders and retractable staircases are brought to life, and all contribute in making the interior totally unique, in a robust and exciting manner.

The colourful collection of furniture, mostly designed by Chareau himself some covered with tapestry by the artist, Juan Lurcat, helps soften the stark industrial features and woven together they create a fascinating contrast of styles.

The Maison de Verre was built from 1928 to 1932 in Paris. Whilst Pierre Chareau was credited with the overall design, he numbered one of three artisans who helped create this stunning building. This included Louis Dalbet, a craftsman metalworker and Bernard Bijvoet, a Dutch architect, a collaboration that was to create a poem that has no equal.

The vision by way of a combination of progressive thinking and unusual site constraints was commissioned by owners, Dr Jean Dalsace and his wife, Annie.  The Dalsaces were collectors, prime movers in the circle of the architects clients and patrons themselves.  The young couple entrusted Chareau with the task of creating their home, the ‘Maison de Verre’ It was to be his masterpiece.  The site was originally an 18th Century hotel.  However, the new owners had the foresight to commission the stripping of the building to its structural skeleton where the bones of the famed and illuminated box were then conceived.  The Dalsace and Chareau families had known each other since before the First World War and were close friends.   The Dalsace’s were a politically active couple and in the 1950’s the house was the setting for the foundation of the Association of Doctors Against War and Facism.  It also reflected the owners love of avant-garde.  At receptions and dinners, guests included Louis Jouvet, Max Ernst and Jeanne Bucher, travellers both famous and unknown.  The hosts warmly welcomed friends from all over the world.

The primary materials used were steel, glass block and wrought metal. Other industrial elements included were exposed oxide red beams, metal sheet and rubberised floor tiles.  This was a building way ahead of its time. Today, ‘industrial chic’ as it’s known is extremely fashionable, not only in homes, like loft conversions, but also pre eminent in office finishes where many companies appreciate the raw industrial aesthetic that has popularised the new generation of tech pioneers.  Maison de Verre predates this fashionable trend by almost ninety years!