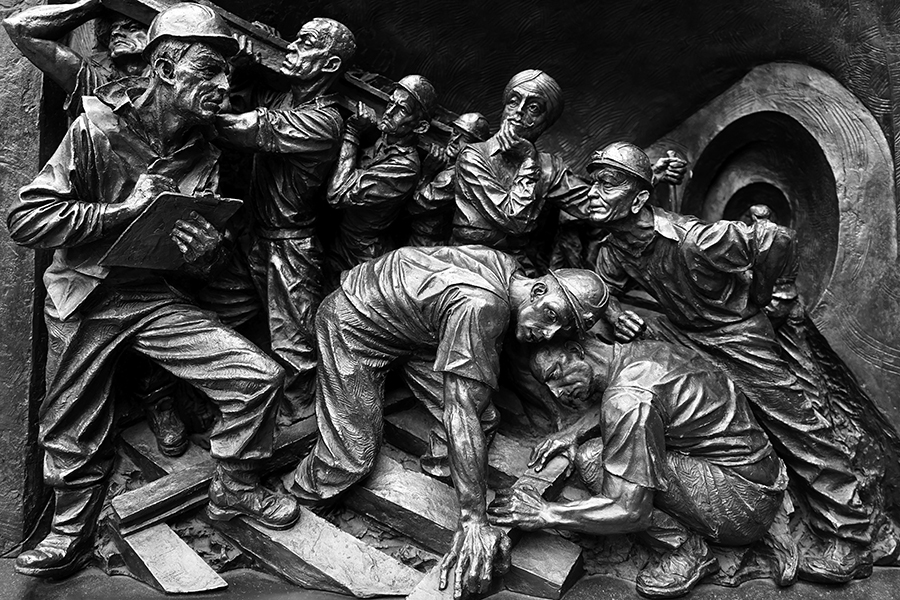 One summer night in August, 1935, a young Soviet miner named Alexei Stakhanov managed to extract 102 tonnes of coal in a single shift. This was nothing short of extraordinary (according to Soviet planning, the official average for a single shift was seven tonnes).

Stakhanov shattered this norm by a staggering 1,400%. But the sheer quantity involved was not the whole story. It was Stakhanov’s achievement as an individual that became the most meaningful aspect of this episode. And the work ethic he embodied then – which spread all over the USSR – has been invoked by managers in the West ever since.

Stakhanov’s personal striving, commitment, potential and passion led to the emergence of a new ideal figure in the imagination of Stalin’s Communist Party. He even made the cover of Time magazine in 1935 as the figurehead of a new workers’ movement dedicated to increasing production. Stakhanov became the embodiment of a new human type and the beginning of a new social and political trend known as ‘Stakhanovism’.

That trend still holds sway in the workplaces of today – what are human resources, after all? Management language is replete with the same rhetoric used in the 1930s by the Communist Party. It could even be argued that the atmosphere of Stakhanovite enthusiasm is more intense today than it was in Soviet Russia. It thrives in the jargon of Human Resource Management (HRM), as its constant calls to express our passion, individual creativity, innovation and talents echo down through management structures.

But all this ‘positive’ talk comes at a price. For over two decades, our research has charted the evolution of managerialism, HRM, employability and performance management systems, all the way through to the cultures they create. We have shown how it leaves employees with a permanent sense of never feeling good enough and the nagging worry that someone else (probably right next to us) is always performing so much better.

From the mid-1990s, we charted the rise of a new language for managing people – one that constantly urges us to see work as a place where we should discover ‘who we truly are’ and express that ‘unique’ personal ‘potential’ which could make us endlessly ‘resourceful’.

Focusing on the ‘self’ gives management unprecedented cultural power

The speed with which this language grew and spread was remarkable. But even more remarkable are the ways in which it is now spoken seamlessly in all spheres of popular culture. This is no less than the very language of the modern sense of self. And so it cannot fail to be effective. Focusing on the ‘self’ gives management unprecedented cultural power. It intensifies work in ways which are nearly impossible to resist. Who would be able to refuse the invitation to express themselves and their presumed potential or talents?

Stakhanov was a kind of early poster boy for refrains like: ‘potential’, ‘talent’, ‘creativity’, ‘innovation, ‘passion and commitment’, ‘continuous learning’ and ‘personal growth’. They have all become the attributes management systems now hail as the qualities of ideal ‘human resources’. These ideas have become so entrenched in the collective psyche that many people believe they are qualities they expect of themselves, at work and at home.

So, why does the spectre of this long-forgotten miner still haunt our imaginations? In the 1930s, miners lay on their sides and used picks to work the coal, which was then loaded on to carts and pulled out of the shaft by pit ponies. Stakhanov came up with some innovations, but it was his adoption of the mining drill over the pick which helped drive his productivity. The mining drill was still a novelty and required specialist training in the 1930s because it was extremely heavy (more than 15kgs).

Once the Communist Party realised the potential of Stakhanov’s achievement, Stakhanovism took off rapidly. By the autumn of 1935, equivalents of Stakhanov emerged in every sector of industrial production. From machine building and steel works, to textile factories and milk production, record-breaking individuals were rising to the elite status of ‘Stakhanovite’. They were stimulated by the Communist Party’s ready adoption of Stakhanov as a leading symbol for a new economic plan. The party wanted to create an increasingly formalised elite representing the human qualities of a superhero worker.

Such workers began to receive special privileges (from high wages to new housing, as well as educational opportunities for themselves and their children). And so the Stakhanovites became central characters in Soviet Communist propaganda. They were showing the world what the USSR could achieve when technology was mastered by a new kind of worker who was committed, passionate, talented and creative. This new worker was promising to be the force that would propel Soviet Russia ahead of its Western capitalist rivals.

Soviet propaganda seized the moment. A whole narrative emerged showing how the future of work and productivity in the USSR should unfold over the coming decades. Stakhanov ceased to be a person and became the human form of a system of ideas and values, outlining a new mode of thinking and feeling about work.

It turns out that such a story was sorely needed. The Soviet economy was not performing well. Despite gigantic investments in technological industrialisation during the so-called ‘First Five-Year Plan‘ (1928-1932), productivity was far from satisfactory. Soviet Russia had not overcome its own technological and economic backwardness, let alone leap over capitalist America and Europe.