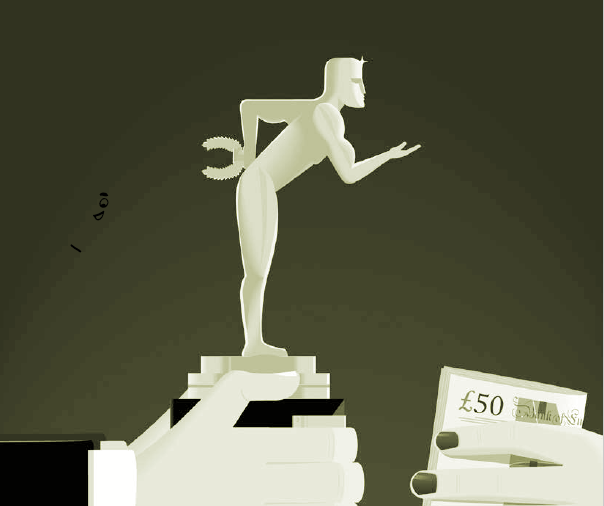 Awards are show business, mining a deep human need or peer approval. Formed and shaped for proﬁt by producers. Staged and fronted by directors nurturing sector nabobs. Marketed and sold with ‘your rivals are on board’ whispers to sponsors. Judging is a pleasant aﬀair: everyone knows everyone; the piles of submissions are ﬂicked through and decisions made, based on written rules and unwritten understandings. The shortlisted are then cajoled to buy tables with ‘wise to come’ calls.

House builders give prizes for good design, honestly. Accountants give awards for those who can count. There are even awards for those who organise awards: on 12 June the Association of Event Organisers (AEO) will hold its annual beano at Grosvenor House. Price: £2,400 for a table of ten. Even those in real showbiz love business awards, earning anything from £5,000 to £50,000 for one night’s ‘corporate’ work. Comedian Dara Ó Briain is your man for this year’s AEO awards.

Everyone loves an awards show. Only awards nights can pull rival tribes and potential clients under one roof, drawing them together to feed oﬀ more than côte de boeuf. Darker desires are sated – rejoicing at a rival’s failure, scorning their success, exulting in your own. Then comes the bonus: post-ceremony back-slapping. Snagging the hard-to-pin-down, with the aim of turning show business into real business. Awards work for all the actors, on stage and oﬀ, and for the audience.

They work for the winners and the losers too. The latter justify defeat by grouching the judging was rigged. But they tend to come back, year after year. The former plaster their marketing with trophies, knowing perfectly well it’s all a bit of a lottery. The producer (that’s the publisher, presuming the awards are run by a business mag, as they often are) banks a six-ﬁgure proﬁt for one night’s work and plans how to make more the following year. The director and co-presenter (often the magazine’s editor) introduces the co-presenting comic, then steps down to the top table and suggests lunch to those nabobs with loose tongues.

Between the late 1980s and 2008 as a magazine editor myself, I directed about 20 sets of awards, ﬁrst for Building magazine and then for Estates Gazette. All were held in the Great Room at the Grosvenor House hotel.

Paying  £8,000 for the chandeliers to be removed so the AV system would work did grate a little.

And paying Graham Norton £40,000 seemed a lot. But, boy, was he good. My job was to shush semi-inebriated diners while we rattled though a list of 14 winners in 40 minutes. But, boy, that gulp of red afterwards felt good.

I also co-hosted a few awards shows for the British Council for Oﬃces, in return for a case of wine – only to be cruelly replaced in later years by newsreader Natasha Kaplinsky, who charged £5,000. The BCO Awards are taken seriously, with experts visiting every development nominated for a prize. The judging of both the Building Awards and the EG Awards too is approached most conscientiously, as much so today as they were in my day. These are Oscar-level shows: and as a judge, you must do your best on subjective criteria.

Objective criteria were the aim of an awards that I persuaded the Investment Property Forum and Investment Property Databank (now MSCI) to back 20 years ago. Ed Luker of CBRE and Rupert Nabarro of IPF helped set up the Investment Property Awards, which were judged on the performance of funds categorised by the IPF and judged only on the returns produced via the IPD computers. They were a failure, at least in the eyes of my publisher. No sponsors, no table sales, and one fatal ﬂaw – the same fund managers kept winning. We let the awards drift away. They may still live quietly, honourably, under another guise: who knows? Lesson for producers: you are dead without table sales, which largely cover costs, or sponsors who provide the gravy that can lift margins to 30% to 50%. And here’s a tip for entrants: if you have won a subjectively judged award rather too often, give entering a rest for a bit. There are limits to the subjectivity of judges, however honourable.