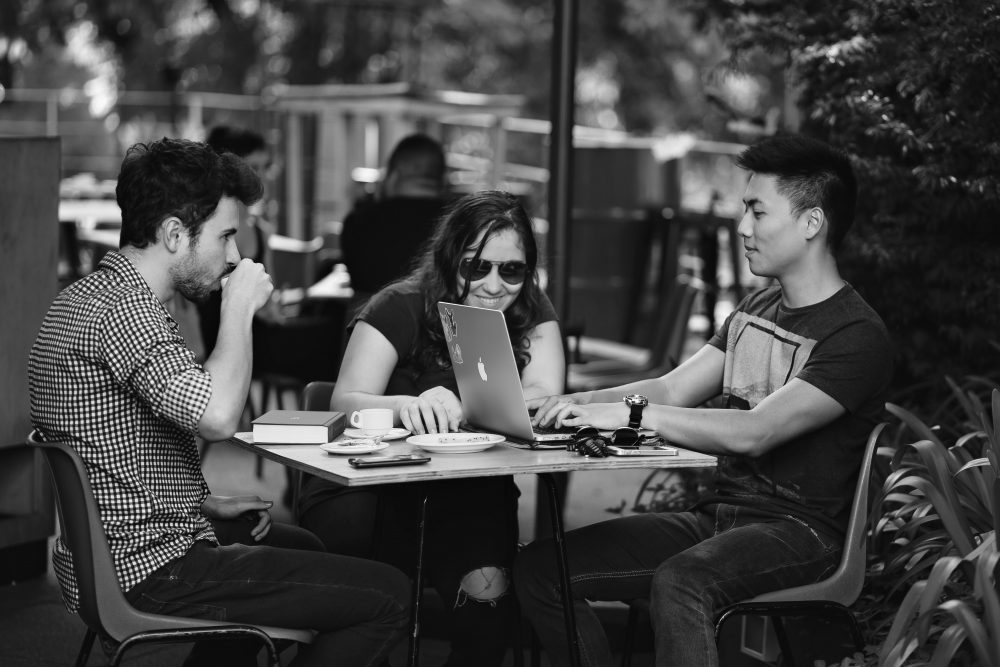 It’s popular to group millennials together as one cohesive group and compare like-for-like. But they are a diverse bunch that share as many differences as they do similarities. Where comparisons are useful is in determining how this generation will drive future demand. After all, their contribution is largely baked into the demographic cake.

We find that while US millennials will continue to enjoy real income gains, the liabilities they’re on the hook for, combined with the damage inflicted upon them by the financial crisis, mean their contribution to demand won’t match earlier generations. That obviously has negative implications for growth. Chinese millennials share many of the demographic stresses of their US peers, but they will see faster real income gains and shouldn’t have to shoulder the same level of unfunded liabilities. This reinforces the reality that China will continue to drive an ever-increasing share of global demand growth. And there isn’t much the US can do about that.

As demographic trends become a more forceful influence on the global economy, it’s a worthwhile exercise to examine how this will impact demand and how this marries with population aging. Both the US and China have reached a point where the share of the population beyond working age is surging (Figure 1). 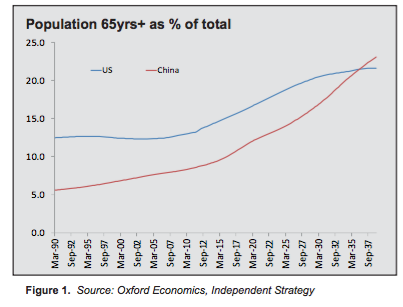 In the US this is due to the increasing longevity of the boomer generation. In China these forces are amplified by the impact of the one child policy. How these pressures balance with demand from the upcoming millennial generation, which is the group that will shoulder a considerable amount of this burden, will vary considerably.

While the boomers — born between 1945 and 1965 — exit the working stage, millennials (born 1981 to 1996) are now starting to enter the peak consumption phase of life (35-55 years old), an age when people traditionally begun to settle down, buy a home and raise a family. As a group, in both China and the US (and other DMs), they represent a much smaller wedge of the total population than earlier generations, most notably the boomers, but also the Gen Xers that arrived between 1966 and 1980 (Figure 2). But their position means they remain the biggest influence in determining the domestic and global economy’s underlying rate of demand growth. 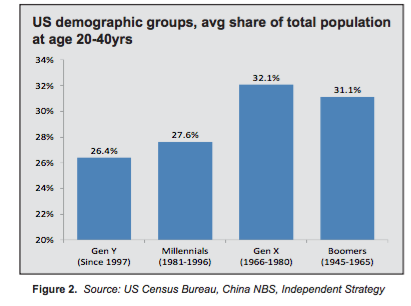 This is where things become slightly more complex, as to determine the transformative impact of each country’s millennial cohort, one also needs to factor changes in consumption elsewhere in the demographic profile. While the aging boomer bracket makes the classical demographic pyramid more top heavy — reflecting both the size of this cohort and the progress (if you can call it that) made in longevity — the costs of these shifts vary depending on a number of variables. These include location (intra-country), the availability and adequacy of social safety nets and the level of savings, as well as the more obvious income growth trends.

Many of these should net off to an extent, but the residual balances will determine how much burden sharing — in the form of intra-generational transfers from millennial workers to boomers in their dotage — need to be made. Where there are large unfunded liabilities, particularly in the case of health and pension provisions, the implications for millennial income and consumption could be significant.

This is already evident in Japan, where demographic trends are further advanced. Pensioners (over 65s) now make up 27% of the population, a level China and the US won’t see until the second half of this century. This has boosted Japanese social security spending from 20% of government revenues in 2000 to nearly 35% today. While Japanese millennials’ employment prospects look great and income levels have started to increase after decades of stagnation due to the tight labour market, domestic demand remains lacklustre. Instead, worker household savings rates have gone through the roof (Figure 3). This reflects Japan’s incredibly low birth rate/shrinking population as well as longer-term uncertainty surrounding the country’s sovereign indebtedness and the perception that the benefits enjoyed by the post-war generations won’t be around when the current working cohort comes to retire. 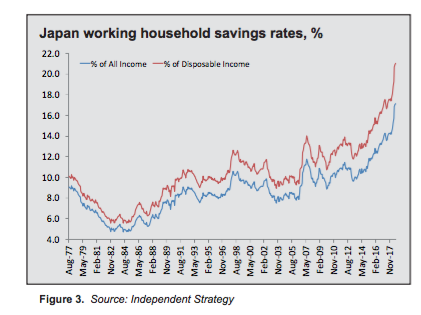 As for the US, based on CBO forecasts, the impact of rising government health and social security expenditure is significant over the course of the next decade. Outgoings are set to rise from 10.4% to 13.1% of GDP. That would take social spending to 56% of the total, soaking up over 71% of total federal revenues (Figure 4). And this is all focused on the boomers, with the increase driven by Medicare (rather than Medicaid) and Social Security. Moody’s sees the current Social Security funding gap at $13.4trn, while the shortfall just from the Hospital Insurance component of the Medicare programme is another $3.2trn. 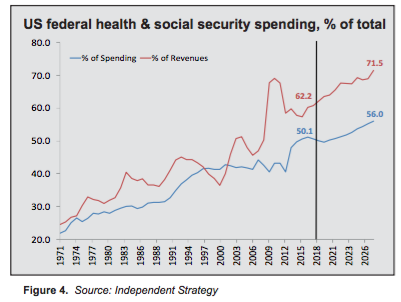 Health is the one sector of the US economy that stands out as parasitic, with ideologic opposition to public programmes and the taxation this would require, deeply embedded. This pretence contrasts with the efficiency that public health systems provide in every other developed country. And for the extra 7.2% pts of GDP the US spends vs. the DM average (Figure 5) — a staggering US$1.47trn per year — it delivers lower (now falling) life expectancy and poorer health outcomes (albeit with more in-room TV, fruit and flower options, if you’re insured). 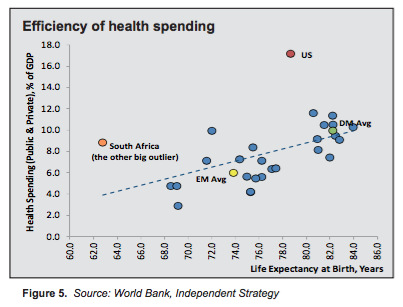 On the pension side, many public employee pension schemes have serious solvency issues. Moody’s thinks public defined-benefit pension schemes (federal, state and local government plans) already have a combined deficit of US$7trn. And that’s despite a big increase in contributions from the States and a decade-long equity bull-market. While benefits have been cut and retirement ages pushed up for younger workers, it’s the cost of covering existing or near retirees that accounts for the bulk of the problem.

All in, the current US pension and welfare (assets – liabilities) gap is equivalent to 115% of GDP! Of course, this doesn’t need to be made up in one shot. But based on the 7-8% p.a. return most pension funds say they need in order to honour their liabilities, versus expected returns closer to 3-4%, it would still imply a net annual funding shortfall of around $700bn, or over 3% of GDP. Closing the gap would require a combination of increased contributions, recipients working longer (or living shorter!) and lower benefits. But such reforms are not likely to be forthcoming voluntarily. Consequently, the pensions gap will to continue to grow.

or the US as a whole (public and private), the World Economic Forum places the retirement shortfall at US$28trn and sees this rising to $137trn (in 2015 prices) by 2050 —which is an even gloomier prospect. But the US won’t be alone. Pension shortfalls are evident globally, including in countries that have far more established defined-contribution systems. China also faces a substantial pensions gap, currently penned at $11trn and seen rising more than ten-fold to $119trn by the middle of the century (Figure 6).