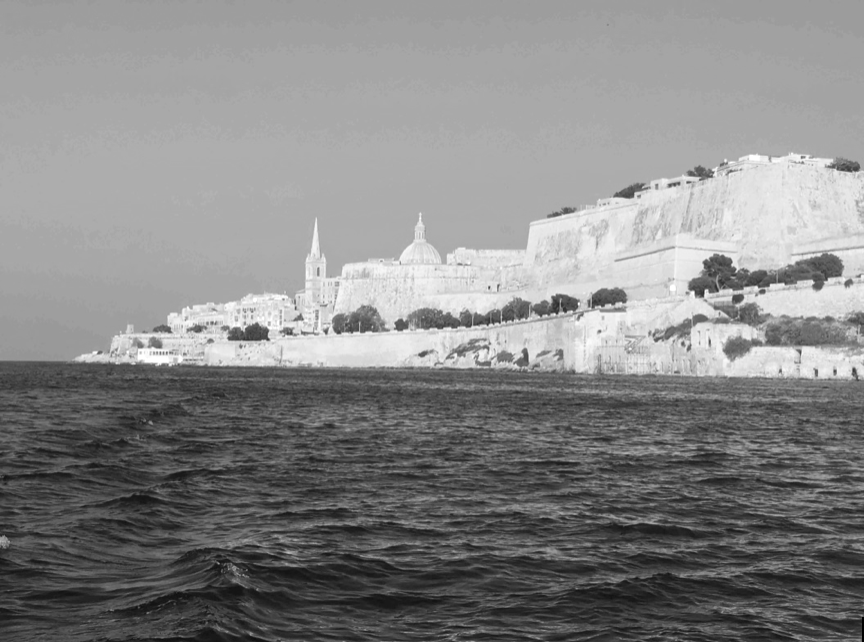 Malta was once a glamourous destination. This small rock, south of Sicily, had been a British dominion since 1800 and since at least World War II had been the playground of the British Armed forces.  It was no accident that Princess Elizabeth and her new husband, The Duke of Edinburgh, spent their honeymoon on this rocky outcrop in the sunny Mediterranean. They lived for two years at Casa Guardamangia and the Queen refers to this period of her life as the happiest and most normal.  The island was unspoiled and contained an enormous number of beautiful palazzos and churches (the myth is that there are 365, one for each day of the year) amongst its wonderful ancient walled cities, dry stone walls and quaint fishing ports.  It was also popular with the fashionable set in London.  Up until the early 1970s, Prince Charles regularly played polo on the island at the Marsa Sports Club.  And Mark Birley considered setting up a club, along the line of the old Annabel’s, in a wonderful old house overlooking the bay in St. Julians.

Then Malta achieved independence in 1964, a little over twenty years after the island had stood up so bravely to the forces of fascism.  First, this small island had defied Italian mass bombing and then, after Hitler deemed the Italian air force incompetent, the Luftwaffe, in a heroic struggle to keep the sea lanes open to Egypt, thus enabling the allies to gain their first victory at El Alamein.  This astounding bravery earned the island a collective George Cross, the only country ever to do so.  However, when the British naval base ceased to operate, Malta suddenly had a large hole in its economy.  So what was Malta to do?  Under the disastrous leadership of Dom Mintoff, who became the Prime Minister in 1971, Malta allied itself with north European socialist countries, and also, bizarrely, with Libya, China and the Khmer Rouge amongst other pariah states.  Mintoff turned to nationalisation, often in breach of property rights (in 1973, for example, shareholders of the National Bank of Malta were forced to surrender their shares, without compensation, overnight), expansion of the public sector and low grade tourism to fill the hole.

Mintoff, an architect by training, had already demonstrated, as a government minister, insensitivity to history and culture by placing government schemes adjacent to immaculately preserved historic sites.  Further and even more violent destruction of the island followed after he left office, when the Nationalists came to power in 1989.  This quaint island became awash with unfettered, rampant development, especially along the East coast of the island.  Sadly, much of the island, with its amazing treasures, became buried under a massive sea of cheap concrete.

The most heinous of planning laws was passed in the 1970s which allowed the charming limestone sea front villas to be replaced by buildings (usually hotels or apartment buildings) of no more than six stories, later changed to eight stories. This has led to some of the dullest, most uniform seaside frontages of any place in the world excepting, possibly, certain former communist Eastern bloc cities. And on Malta there is nowhere to hide as water is a scarce resource and it is not possible to screen any of the ugliness from view with judicious planting. Very little vegetation grows on this barren rock except the occasional but thin palm or indigenous but tiny Maltese gum, oak and pine trees.  Daphne Caruana Galizia, the Maltese journalist who wrote a controversial blog and who is alleged to have been murdered recently, occasionally highlighted these absurdities and the flagrant disregard the Maltese have for planning laws.  These are not isolated incidents but have happened numerous times all over the island for years and are still happening today.  Thus Malta, within a few decades, had destroyed much of its charm with unnecessary self-mutilation. Both economically and architecturally it seemed to have destroyed the goose that laid the golden egg.

But has Malta finally woken up to its errors and realised that it still has so much to offer?  Since joining the European Union, when it cleverly negotiated new tax laws, Malta has become the on line betting capital of Europe. It seems that everyone and their dog want to set up a company in Malta for its beneficial tax legislation and its easy going compliance regulations. That, coupled with an influx of Italians from Sicily, means that Malta is once again booming.