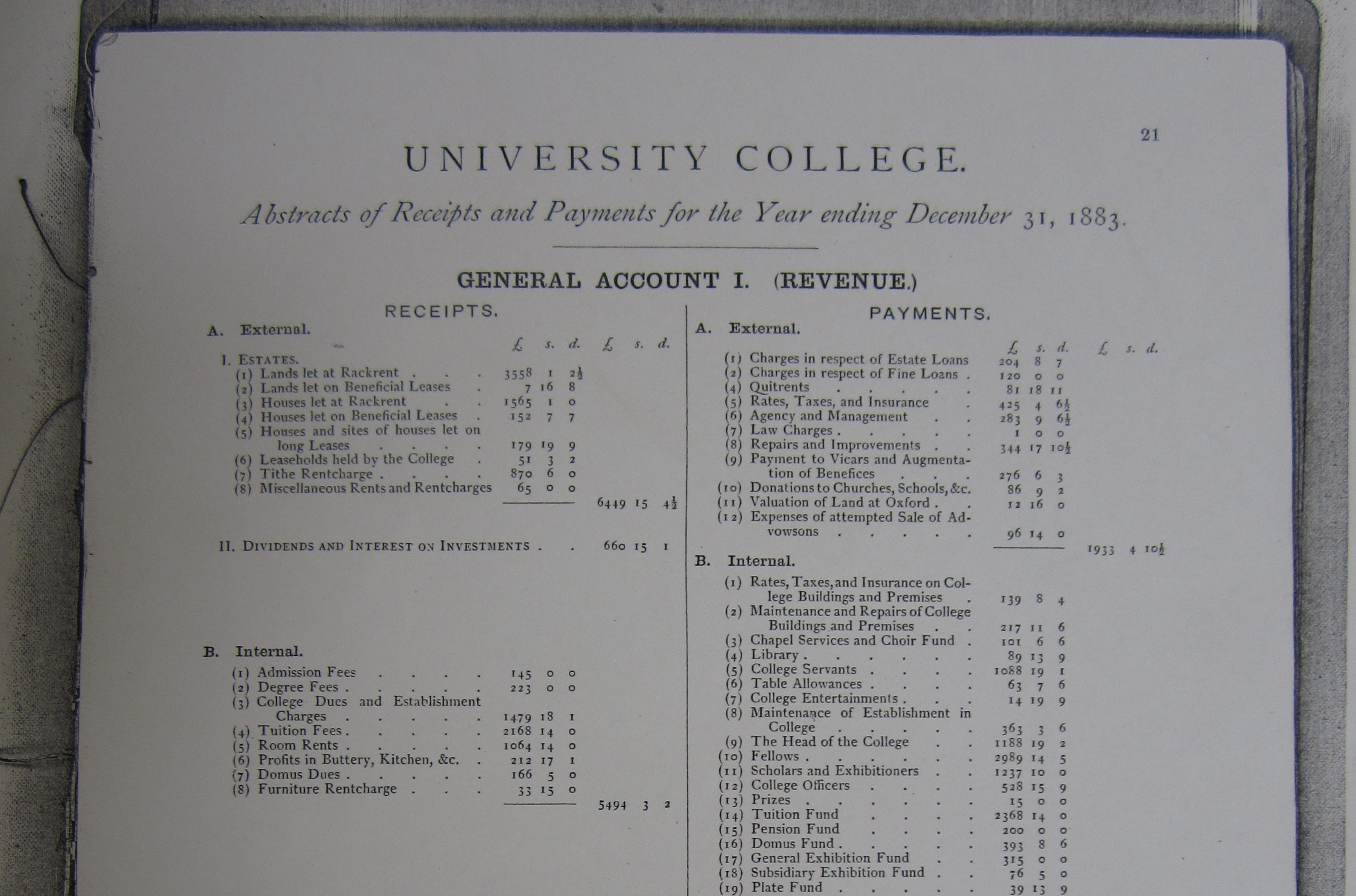 In 1850 the quiet of Oxford was shattered. After many years of criticism inside and outside the university, a Royal Commission was created, which led to an Act of Parliament which began the process of modernising the university. Several obsolete customs such as limiting fellowships and scholarships to applicants from particular counties or schools were abolished.

In 1872 a new Parliamentary Commission was created to investigate the income of Oxford and Cambridge. This was more easily said than done: the commissioners encountered arcane accounting systems, some barely altered since medieval times. As at Magdalen College, some accounts were still written in Latin.

Therefore a great change was introduced: from 1 January 1883 all Oxford colleges had to prepare printed accounts set up identically. Since then, colleges have submitted such annual accounts for public scrutiny. Furthermore the wealthier colleges now had to give some of their income to the university to help with its rising administrative costs.

These changes presupposed that the colleges’ incomes would remain in a healthy state, but the 1880s and 1890s saw a period of great financial upheaval, thanks to two causes.

The first was that the old system of beneficial leases, with corn rents and entry fines, was replaced by so-called “rack rents”. Rents now were calculated afresh whenever a new lease was signed, so that tenants paid market rates. In return tenants no longer paid entry fines, and colleges paid for the maintenance of their properties. This seems reasonable, but the change was problematic: just when the colleges lacked liquidity, due to the ending of entry fines and the hiatus before the new system kicked in, they were presented with large repair bills. Not infrequently colleges had to take out loans from the government to tide themselves over.

Just then, in the late 1870s and early 1880s, Britain suffered a great agricultural depression. The effects of cheap food imports from abroad were exacerbated by bad harvests, and colleges had to reduce the rents on their agricultural estates to stop them being left vacant. Colleges which depended heavily on such estates suffered badly: some even froze fellowships to make ends meet.

In addition, from the 1920s, the first government payments were made to the University of Oxford. The colleges did not receive such grants, but after 1945, they began to benefit indirectly. Income from the colleges’ endowment paid for staff wages, student scholarships, and property repairs, but now, thanks to money from the university (and hence the government), most fellows were paid partly by their colleges, and partly by the university.

Another great change took place in the identity of the bursars. In earlier centuries, fellows who had shown an interest in finance were elected bursar regularly. By the second half of the nineteenth century, such fellows might be re-elected bursar annually, and remain in post for several decades. In the second half of the 20th century, some colleges went once further, and appointed professional financiers or land agents as their bursars. This move to professionalism became ever stronger in the 1990s and 2000s, and now only a minority of colleges still have academic fellows as their bursars. This change mirrors a general development in which academic fellows cease to assume managerial posts in college, but give way to full-time professionals.