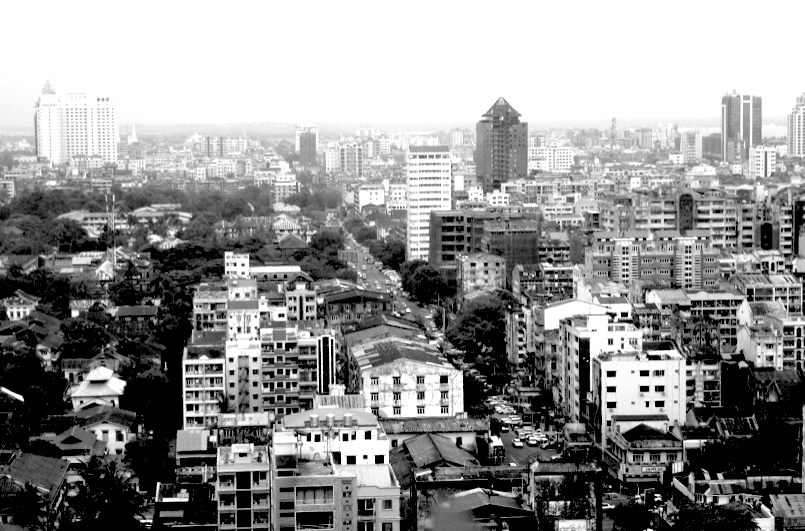 Real estate is the ultimate wealth creating machine. I have had the privilege of covering real estate markets from the perspective of a valuer, a policy-maker, an equity analyst, a real estate fund research arm, a businessmen and now, a cretech/fintech wannabe. We have walked and are still walking many kilometres when covering Asian and Australian real estate markets. I hope you will enjoy our journeys as we share them with you.

In 2012, as I returned from a family trip, my boss called me to join him for a meeting – which turned out to be the start of another twist in my real estate journey. We met Aung Zaw Naing, the Managing Director of Shwe Taung Group and his colleagues, from Myanmar. Within two weeks, we were whisked off to Yangon, the capital city of Myanmar, to discuss how we could contribute to this far-sighted company.

One of the last frontier markets

As we boarded the flight, I could not help but notice that the flight was full on a weekday, so perhaps we were already behind the curve in getting into the market. With great excitement as we landed, we stepped off the plane into the mystical world of Yangon! The blast of heat was apparent as we stepped out of the air-conditioned space. The arrival pick-up area looked more like a bazaar than an airport, with people shouting for cars and officials directing traffic by incessantly blowing their whistles. It was not pretty but it was very orderly. The people looked so contented and happy despite the conditions which looked tough to most of us.

As our van departed the airport and we moved onto Pyay Road, the main trunk road leading to town, it felt like we had just stepped into a time machine which brought us back to a city that looks very much like how Singapore was in the 1980s. The buildings and the roads were all very orderly, looked functional and perhaps modern in the 1980s, with little frills. The cars and buses looked like those I took when I was 12 years old.

The potential of the charming city becomes apparent

As our host gave us a rundown of the real estate market in the van, we started to appreciate how far behind the market is and the enormous potential upside in real estate if the economy were to thrive. Five key factors that underline the potential of the market that struck me were that:

As we stopped at a traffic junction, a boy barely 12 years old knocked on my window and flashed a ring-bound document which said ‘Condominium Law’ on its front page. Out of curiosity, I wound down the window and bought the ‘law’ from the street vendor. It appeared to be a duplicate of a law that the government is mooting. Our local partner informed me this was a version of the law that was being discussed which would allow for strata-titles to be issued and for foreigners to legally purchase certain types of real estate in Myanmar.

As we visited the various developments, it was clear that the estate market was ill-equipped to accommodate the influx of foreigners that were to enter the country. There were effectively only two high-rise office buildings and these are more than 20 years old and poorly specified. Good quality serviced apartments had six month waiting lists and were charging relatively high rent. The best shopping centre, Junction Square, completed in late 2011, had a tenant mix that looked more like that of a night market. There was a noticeable lack of Starbucks or McDonalds and shop rentals were dismal for the landlord. Five years on, what has changed?

I visited Yangon multiple times and even spent an entire year living in Yangon. On my most recent trip in June, I could not help but notice that the cityscape has changed significantly. As we departed the airport, I noticed that the traffic jam had reached almost Bangkok standard in some parts of the city. Many mega-projects have been completed and more are coming. However, the emptiness of these buildings can be felt as many building owners are finding it difficult to find tenants: the earlier expectation of a flood of foreign participants in Yangon’s economy has not been realised yet. Myammar Centre, one of the latest integrated projects to be added, May 2017