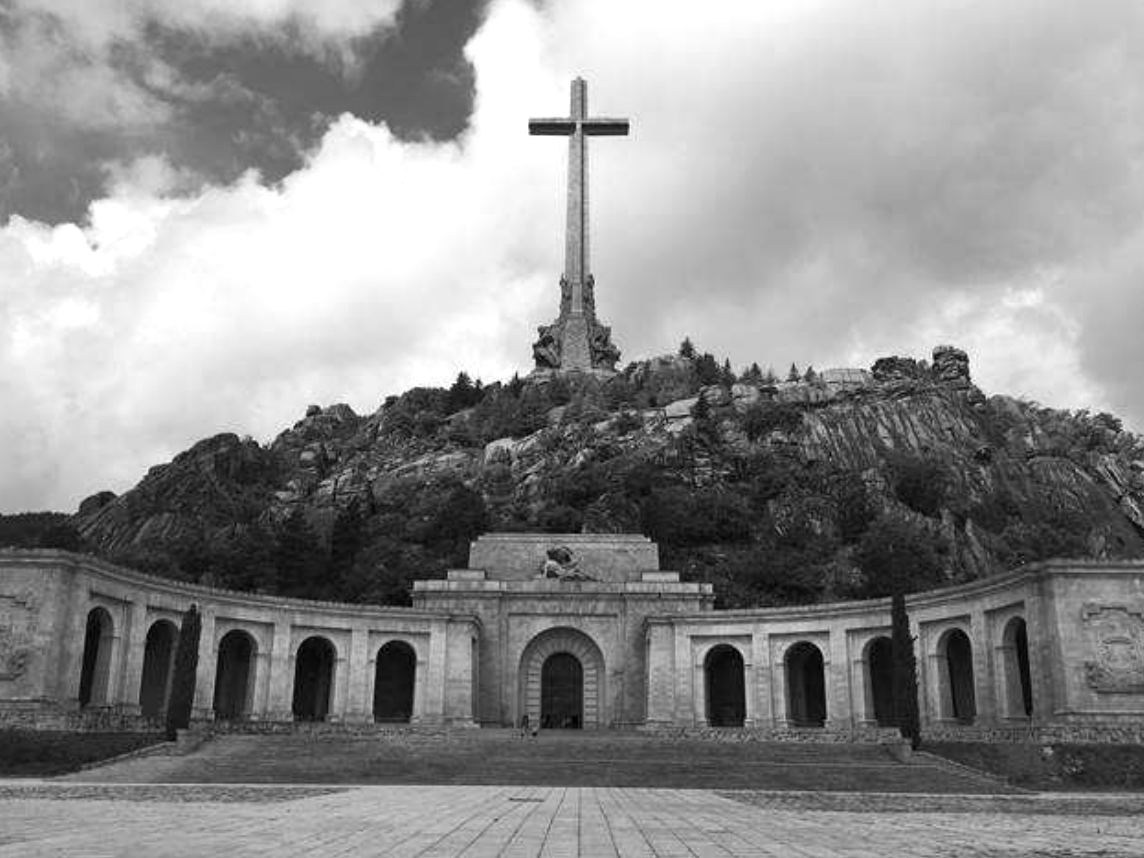 Much has been written in the Spanish press recently about the Valle de Los Caidos (the Valley of the Fallen), the monument to those who died in the Spanish Civil War (1936-9) which is a one hour drive north of Madrid near the Escatorial Palace, Philip II’s summer residence. It is built from the same austere grey granite as the Escatorial, during General Franco’s rule of Spain (Franco ruled from 1939-75) and he himself is buried there along with J A Primo de Rivera, who was the founder of the Falange (the Spanish fascist movement). Monument at Valle de Los Caidos (Valley of the Fallen), near Madrid, built 1940 to 1959 (photograph by author)

The site is in the hills and there is a more alpine feel to the climate here which is why Phillip II escaped to this region during Madrid’s hot summers. The monument consists of a very tall imposing stone cross under which lies a crypt dug deep into the hillside. The monument conforms to most people’s idea of fascist architecture. It is monumental, imposing, solid, symmetrical, austerely detailed and overbearing in both scale and proportion. The crypt is dug a staggering 300 meters into the hillside and is impressive both in its size and in the kitsch way one would expect of a building commissioned by a totalitarian regime.  The individual is diminished and the state is aggrandised by the strength of the building which overpowers the observer. The recent uproar about the Valle de Los Caidos has been raised by the families of those who died and fought for the Republican cause and who are buried here. The vast majority of the 30,000 dead buried here fought on the Nationalist side. It seems that the government has agreed to disinter the Republican dead and rebury them elsewhere but is actually unable to find the funds to do so.   There is also a movement to move Franco’s body elsewhere as he actually did not die during the war.  Controversially, many Republican prisoners were forced to construct the monument and certainly a number of them died during the construction although the actual number is disputed by both sides.

My friendly taxi driver told me that his grandfather was a doctor in Madrid and fought for the Republican side as Madrid was controlled by the Republican government.  His brother, who was a soldier, lived in Zaragoza and so fought for the Nationalists.   Some did try to change sides but it was a risky business and those who were caught were executed (on both sides).  Furthermore, independence movements such as Basque Nationalism played a confusing role.  However, time and again I have heard of families split horribly like this.

We were visiting Madrid to see my wife’s former housekeeper/nanny, aged 94.  I always wondered on what side the sympathies of this charming lady lay during the conflict.  She said that she could not support the Republic as they desecrated the churches (over 6,800 priests were murdered during this brief but vicious war) and besides she was from Zaragoza which was Nationalist.  Often it was geographical chance that determined which side one fought for and often two members of the same family fought on opposite sides.

However, I am interested to see how architects in Spain responded to the great twentieth century ideological battle between communism and fascism.  Generally it is true that the Republic attracted ‘avant-garde’ artists and architects as it perceived the avant-garde as being synonymous with progress.  And the rostrum of artists associated with the Republic is impressive; Alexander Calder, Robert Capa, Henri Cartier-Bresson, Salvador Dali, Juan Miro, Pablo Picasso and Man Ray for example.  The list of architects is less well known but includes the GATPAC group, founded by Josep Lluis Sert and L G Soto amongst others.  Much of what had been built by the Republic in Madrid before the civil war was destroyed during it.  Madrid still suffers from this and has a feeling of a city left behind architecturally.  There is really very little that excites and part of the reason for this is that the country’s isolation after the Second World War and its poverty, as a result of its isolation, did not encourage new design.

After Franco’s death there have been a few attempts to drag Madrid back into the modern world.  Herzog de Meuron’s Caixaforum displays an impressive cantilever and some of Raphael Moneo’s buildings are well designed but hardly excite.  There aren’t even many interesting examples of totalitarian architecture as there are in Rome, for example.  Madrid, with its less grand, Paris like boulevards, is on the whole attractive but rather insipid architecturally.

Barcelona however, by contrast, seems to have captured much of the dynamic art and architecture that has bypassed Madrid.  Barcelona is an energetic industrial city, much of it designed in the 19th century on a grid system except for the one road that cuts diagonally across the grid.  Corners are chamfered so crossings have a more open feel.  However, most building plots are the same size as they conform to the grid plan.  As a result, the conundrum for most architects and their clients was how to differentiate themselves from their neighbour.  This was resolved by highly designed, one off, often very idiosyncratic and slightly vulgar facades that expressed the owner’s wealth and the architect’s preference for the latest neo baroque or art nouveau fashion in decoration.  It is the only city where Antonio Gaudí can be imagined as a natural product of this extreme and competitive context.  Gaudí, I personally find difficult to like, but in the context of Barcelona I can understand him.  And Gaudí’s great gift to the city was to say to future generations of architects ‘Look, I have had a bit of fun, why don’t you?’  When an architect receives a commission in Barcelona there is always in the back of his or her mind, the thought of being compared to Gaudí and this nudges him or her to push the boat out a little further.  As a result Barcelona is showered with fun and exciting new architecture.