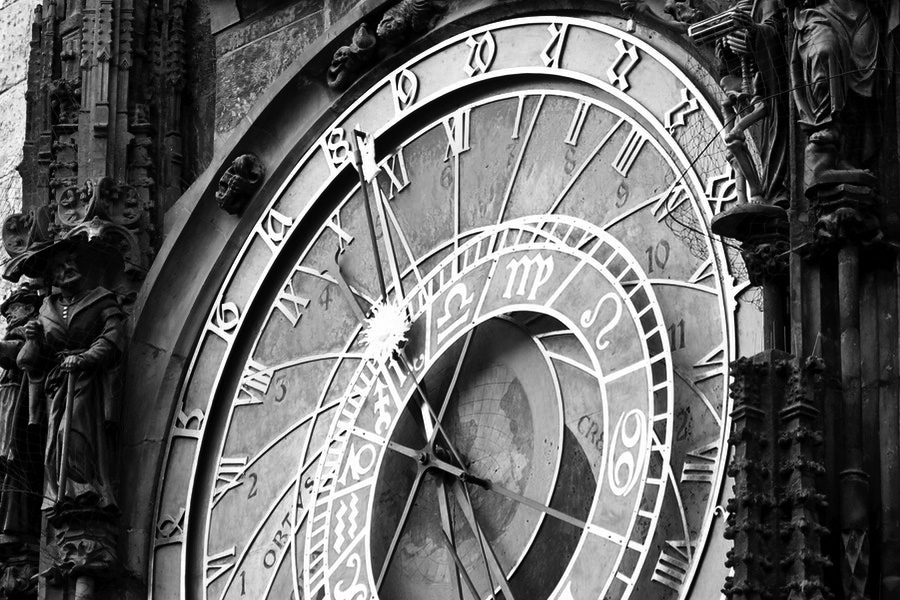 What is the duration of the present moment? How is it that this present moment is replaced by ‘the next moment’? Within every organism, sentient or not, there are thousands of chemical processes that occur with their own characteristic time periods, but these time periods start and stop at different times so that there is no synchronized ‘moment’. Elementary atomic collisions that build up molecules take nanoseconds while cell division takes minutes to hours, and tissue cell lifespans vary from two days in the stomach lining to eight years for fat cells (see Cell Biology). None of these jangled timescales collectively or in isolation create the uniform experience we have of now and its future moments. To find the timescale that corresponds to the Now experience we have to look elsewhere.

It’s all in the mind!

A variety of articles over the  years have identified two to three seconds as the maximum duration of what most people experience as ‘now’, and what researchers call the ‘specious present’. This is the time required by our brain’s neurological mechanisms to combine the information arriving at our senses with our internal, current model of the ‘outside world’. During this time an enormous amount of neural activity has to happen. Not only does the sensory information have to be integrated together for every object in your visual field and cross connected to the other senses, but dozens of specialised brain regions have to be activated or deactivated to update your world model in a consistent way.

In a previous blog I discussed how important this world model is in creating within you a sense of living in a consistent world with a coherent story. But this process is not fixed in stone. Recent studies by Sebastian Sauer and his colleagues at the Ludwig-Maximilians-Universität in Munich show that mindfulness meditators can significantly increase their sense of ‘now’ so that it is prolonged for up to 20 seconds.

In detail, a neuron discharge lasts about 1 millisecond, but it has to be separated from the next one by about 30 milliseconds before a sequence is perceived, and this seems to be true for all senses. When you see a ‘movie’ it is a succession of still images flashed into your visual cortex at intervals less than 30 milliseconds, giving the illusion of a continuous unbroken scene.  (Dainton: Stanford Encyclopedia of Philosophy, 2017).

The knitting together of these ‘nows’ into a smooth flow-of-time is done by our internal model-building system. It works lightning-fast to connect one static collection of sensory inputs to another set and hold these both in our conscious ‘view’ of the world. This gives us a feeling of the passing of one set of conditions smoothly into another set of conditions that now make up the next ‘Now’. To get from one moment to the next, our brain can play fast-and-loose with the data and interpolate what it needs. For example, in our visual world, the fovea in our retina produces a blind spot but you never notice it because there are circuits that interpolate across this spot to fill in the scenery. The same thing happens in the time dimension with the help of our internal model to make our jagged perceptions in time into a smooth movie experience.

Neurological conditions such as strokes, or psychotropic chemicals, can disrupt this process and cause dramatic problems. Many schizophrenic patients stop perceiving time as a flow of linked events. These defects in time perception may play a part in the hallucinations and delusions experienced by schizophrenic patients, according to some studies. There are other milder aberrations that can affect our sense of the flow-of-time.

Research has also suggested the feeling of awe has the ability to expand one’s perceptions of time availability. Fear also produces time-sense distortion. Time seems to slow down when a person skydives or bungee jumps, or when a person suddenly and unexpectedly senses the presence of a potential predator or mate. Research also indicates that the internal clock, used to time durations in the seconds-to-minutes range, is linked to dopamine function in the basal ganglia. Studies in which children with ADHD are given time estimation tasks shows that time passes very slowly for them.

Because the volume of data is enormous, we cannot hold many of these consecutive Now moments in our consciousness with the same clarity, and so earlier Nows either pass into short-term memory if they have been tagged with some emotional or survival attributes, or fade quickly into complete forgetfulness. You will not remember the complete sensory experience of diving into a swimming pool, but if you were pushed, or were injured, you will remember that specific sequence of moments with remarkable clarity years later!

The model-building aspect of our brain is just another tool it has that is equivalent to its pattern-recognition ability in space. It looks for patterns in time to find correlations which it then uses to build up expectations for ‘what comes next’. Amazingly, when this feature yields more certainty than the evidence of our senses, psychologists like Albert Powers at Yale University say that we experience hallucinations (Fan, 2017). In fact, 5-15% of the population experience auditory hallucinations (songs, voices, sounds) at some time in their lives when the brain literally hears a sound that is not there because it was strongly expected on the basis of other clues. One frequent example is that  people claim to hear the Northern Lights as a crackling fire or a swishing sound, because their visual system creates this expectation and the brain obliges.

This, then, presents us with the neurological experience of Now. It is between 30 milliseconds and several minutes in duration. It includes a recollection of the past which fades away for longer intervals in the past, and includes a sense of the immediate future as our model-making facility extrapolates from our immediate past and fabricates an expectation of what comes next.

Living in a perpetual Now is no fun. The famed psychologist Oliver Sacks describes a patient, Clive Wearing, with a severe form of amnesia, who was unable to form any new memories that lasted longer than 30 seconds, and became convinced every few minutes that he was fully conscious for the first time. “In some ways, he is not anywhere at all; he has dropped out of space and time altogether. He no longer has any inner narrative; he is not leading a life in the sense that the rest of us do […] .It is not the remembrance of things past, the “once” that Clive yearns for, or can ever achieve. It is the claiming, the filling, of the present, the now, and this is only possible when he is totally immersed in the successive moments of an act. It is the “now” that bridges the abyss.”

This monkeying around with brain states, internal model-making and sensory data creates Now as a phenomenon we experience, but the physical world outside our collective brain population does not operate through its own neural systems to create a Cosmic Now. That would only be the case if, for example, we were literally living inside The Matrix… which I believe we are not. So in terms of physics, the idea of Now does not exist. We even know from relativity that there can be no uniform and simultaneous Now spanning large portions of space or the cosmos. This is a problem that has bedeviled many people across the millennia.

Augustine (in the fourth century) wrote, “What is time? If no one asks me, I know; if I wish to explain, I do not know. […] My soul yearns to know this most entangled enigma.” Even Einstein himself noted “that there is something essential about the Now which is just outside the realm of science”.